Three little words that have confused me for a very long time: You're too nice.

I would like to know exactly when being nice became a problem of excess.  When did being nice become a no-no?  Where exactly is that line between "just enough nice" and "too nice"?  Someone help me with this please!

Before I continue, I would like to put my meanie-pants on and bitch slap you just so I can be like the cool kids and have the appropriate amount of nasty going on while we talk here.  Cuz I'm not really sure what I'm doing in this "bad girl territory", so I figure that's a good place to start. 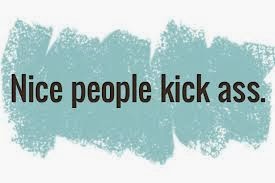 I'm a mid-western girl.  My parents moved to the east coast when I was 13.  I was traumatized because the month before we moved, my father had travelled to Aruba to look at a restaurant, so I thought that if we were moving that we would be heading to that "One Happy Island".

Instead of working on a tan and gettin' my island groove on, I found myself being analyzed and torn apart by my peers who were kind of harsh.  I dressed wrong, I spoke wrong, I carried myself wrong, and I was "too nice", which was an undesirable trait.  So, yes, I've been confused since I was 13.

But I'm not alone!  My mother, also born and raised as a mid-west girl, has been hearing the same judgement since we got here.  She's just as confused as I am about this one.  However, a few weeks ago,  she uttered those dreadful words to me, and my response was, "When did it become wrong to be nice?  Either I'm nice or I'm stupid.  But there is no "too nice".  Maybe they're just too f*cking bitchy???" 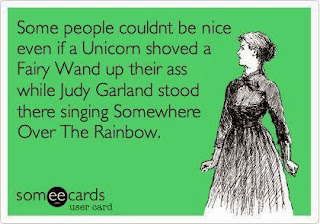 I listen to Howard Stern on satellite and when you hear people talk about his wife, Beth, they always marvel about how nice she is and how she's such "an angel".  Well, I hate to break it to you all, but I grew up in the same place that she did, and I'm the same age that she is, and her behavior seems entirely appropriate and normal to me.  It's no big shocker.  In fact, I have a boatload of cousins who are just like her!  If you got us all together in one room and filmed it, apparently they could promote it as a science fiction series or some other oddity.  An observation of a herd of Too Nicers?   Ooooooo!  Scary stuff.  (oh, puh-leez)

My husband says part of why he married me because of my morality.  When he mentions behavior here that I find mean spirited or selfish, I'm always shocked.  And when I'm shocked, he's surprised.  To him, it's all normal.  It's normal for people close to you take advantage of you, or to turn their backs on you, or abandon you for an extended period of time, or blatantly lie to you, or to say shitty things and expect you to get over it because they "feel better after venting".  I'll stop there.  I'm sure you get it. 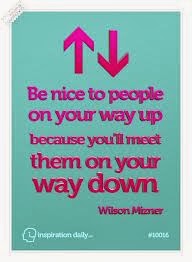 Justin is dying to go to where I grew up just so he can see if there actually ARE more people like my mother, my brother and me.  Like we are some kind of Holier Than Thou side show freaks in his world? While I'd love to think we are special, the fact is that people who live further away from big metropolitan areas are different, and there are tons more like us.

When I have to explain my "level of niceness" in a discussion, it usually starts with, "You know me....the happy idiot!"  I say it with a smile, but I know it's what many people think.  I know because I have good hearing and they talk too loud.

Here's my drama.  I want my daughter to think and live her life more like my family and less like "the local status quo".

Don't get me wrong, I love the extra bit of self confidence and outspoken tendencies of the people from here.  I like that they have a thicker skin and are a little less sensitive.  And I think it's awesome that they will get in your face and tell you that you're an asshole when you really deserve it!  However, I can't seem to figure out how to make "bad ass" and "too nice" merge.  At some point they start to work against each other.
If I had my druthers, Allie would be kind and loving to people, but speak up when she's being treated in a way she doesn't like.  I want her to stick up for herself and for others who deserve it, but in a way that is respectful and intelligent.  She should be too nice, but only to people who deserve it.  And when people use her pleasant and good natured demeanor against her and criticize her for it, I hope it doesn't deter her from being a good person in the future (insert kick in the shin here).

I must clarify that everyone here isn't a bigfatjerkface.  There are many awesome people sprinkled around this area.  Granted, some of them are from out of town as well, but there are just as many that were born and raised here.  And you know what they tell me?  They say that people always tell them that they are "too nice".

Really, people?  How did something so good become so wrong? 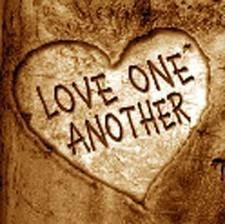