Dog Drama and (Lack of) Apologies

We've had some hoopla going on lately.  First and foremost, my (former) dog Daisy was attacked by two very pissed off dogs.  Some of you may remember Daisy, the shorkie that I had for about 5 years.  At the beginning of this year, the stars aligned and she went to live with my parents across the street.  She was getting growlie with Allie and my parents suddenly felt the need to have something small and furry running around the house.   Perfect timing.

I have to pause here to clarify something.  I'm a firm believer that when you get any pet, you need to take full responsibility to give them the best possible care for the rest of their lives.  Pets are NOT disposable.  It's a serious commitment.

However, when your pet starts to threaten the well being of one of the people in your home, the responsibility changes.  First, you need to find a reliable, caring new home for him or her.  Choose carefully.  Second,  I personally feel that if you have a pet that threatens your child and you do nothing but just hope it will stop, then you are an irresponsible parent.  Your invitation to shitty parenting is in the mail.  IT WILL NOT "JUST STOP".  You need to DO something.

Okay....so, Daisy trotted across the street and lives with the parental units.  Justin has declared that they better not try to give her back because they "totally ruined the dog".  She eats better than I do.  They dote on her and cater to her needs.  I miss her at times but she's sooooooo much happier over there.  In actuality, I too am so much happier when she's over there.  I love her from a distance.

A few days ago, my father was walking Daisy when their neighbor's dog came running out of nowhere and attacked her.  The dog got out of his collar and came running, so it was an accident on the part of the owner.  She came running (with the other dog....super smart!) and things got ugly.  Fortunately my neighbor/friend/Wondermom heard the screeching and came running.  Somehow they managed to break it up.  My mom still gets teary when she thinks about the noises Daisy made while trying to get away from the dogs.

How bad was it?  See for yourself. 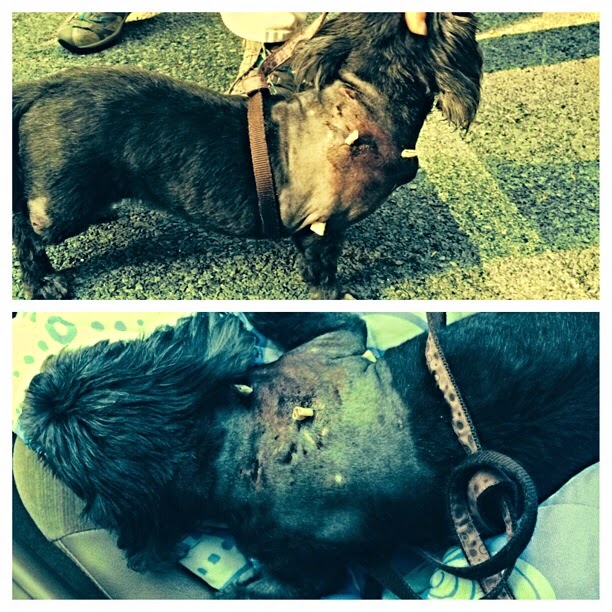 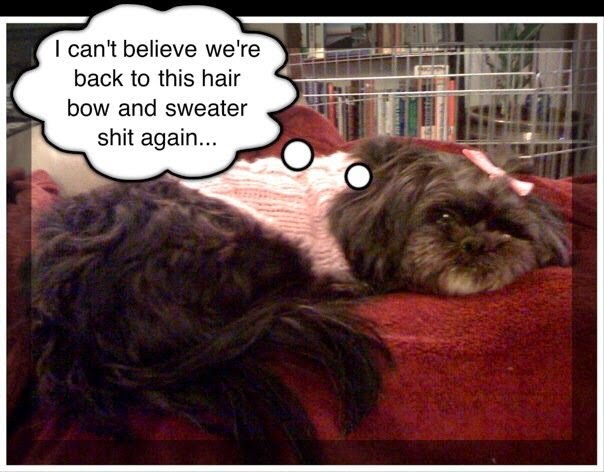 What she normally looks like....at my house....she has an attitude

Here's the kicker!  The neighbor doesn't feel she should have to pay for the vet bills since she's not sure it's her fault.  I know....it doesn't make sense, but some people just can't accept responsibility (that word again) for their errors.  Said neighbor is a renter and moving out this weekend.  Apparently she wants to see if she can move and skip out on the bill.

This is someone actively involved in a local church.  Now that there is Christian-like behavior, isn't it?  I have  term for these people who claim to be all about God, but act like they are all about THEMSELVES; I call them Faux Christians.  They can pretend to be spiritual, but the Big Cheese In the Sky knows what's really going on.

My parents are worn out and exhausted.  This has been traumatizing and exhausting.  They are so tired of "fighting" that they have considered giving up.  However, Justin and I  are deep into PI/lawyer/righteous-freeedom-fighter mode, so we aren't going to stop.  I think our tenacity to win this thing is part of why they are exhausted, but they're too nice to admit it.  I.E. "Vicki, I'm just tired of this.  It's not worth all of my time.  I just want it to be over." "What?  I'm working really hard to help you get what you deserve! We can't stop now!"

I just now realized as I typed that how narcissistic that sounds!  Wow!   Mom, I promise you that I'm doing this solely for you and Ben.  We are a strong people!  We will not lay down and die when we've been wronged!  (raises fist in air and shakes it!!)  And now I've realized where my daughter gets her dramatic side from.  Great. (that was sarcasm)

Here's my question:  Why is admitting your wrong so damn hard for people??? The lady clearly didn't let her dog go on purpose.  She felt bad about it.  The fact is that her dog got off of the leash and put his chompers into Daisy's flesh, like, a lot.  So, it's the neighbor's error.  Shit happens people!  It was an accident.

She felt remorse.  BUT, she did not feel responsible (there's that effing word again!) enough to pay to put Daisy back together again.  She feels that since she didn't see their initial encounter that maybe Daisy snapped at her dog first, thus starting the whole commotion.  "My dogs are great with other dogs at the doggie park."

Really?  Seriously?  That's your defense?  Did you not see EVERYTHING that followed?

What would you do?  I would be annoyingly apologetic.  And if the "victims" wanted me to pay the vet expenses, I would do everything I could to accommodate them.  I'd be checking in to see if they were okay.  I would send "Im really f**king sorry" gifts flying in their direction.  And I would definitely be on red alert with my dogs, their collars, their attitudes, etc from that moment on.

I want Allie to embrace putting her ego aside and admitting she made a mistake and  take (I wont say the R word again) for her actions.  Within reason.

Sounds good in theory, doesn't it?

Well, I'll have you know, she is the WORST apologizer ever.  EV-ERRRRRRR.  Take two extremely stubborn people  and have them create another human being and you end up with the most super-snotty-cant-say-I'm sorry-extra-shitty-apologizer EVER.  She's been known to yell "I'm sorry" with a nasty little attitude, when all we want is for her to admit she feels bad when :

I could go on, but I'll spare you the details.

I'm not going to give up though.  Eventually, I'll find the right thing to say that will drive the point home in her 3 year old mind.  I will not have a "non-apologizer" for a child.

To wrap this up, I'll just let you know that Daisy will survive and is being fussed over to such a degree that I think she might try to "work the situation" and drag it out a bit.  Justin is correct.  She has been ruined.  Yet we love her. 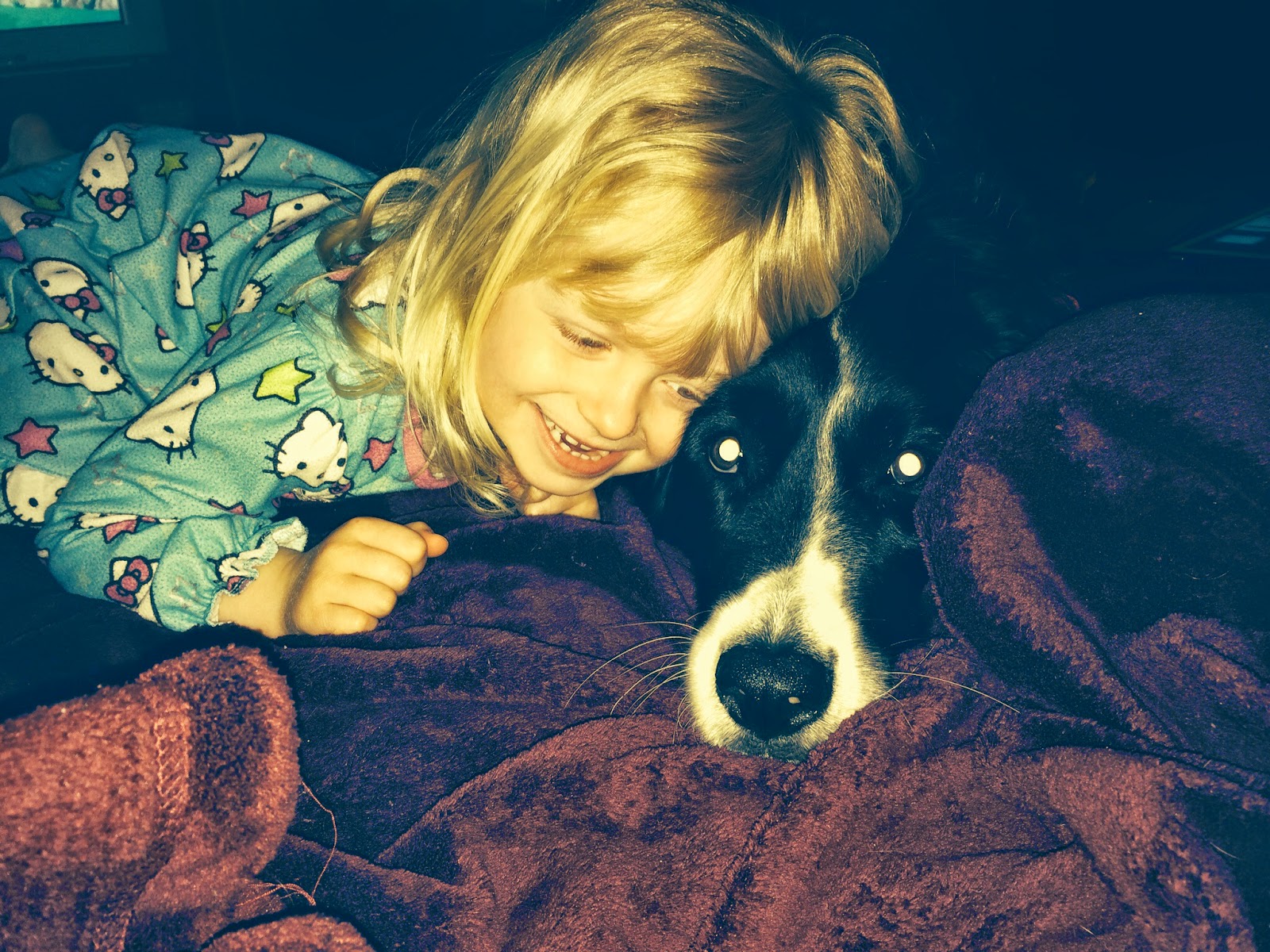 Allie and Sadie snuggling up in bed together.  My two favorite girls! 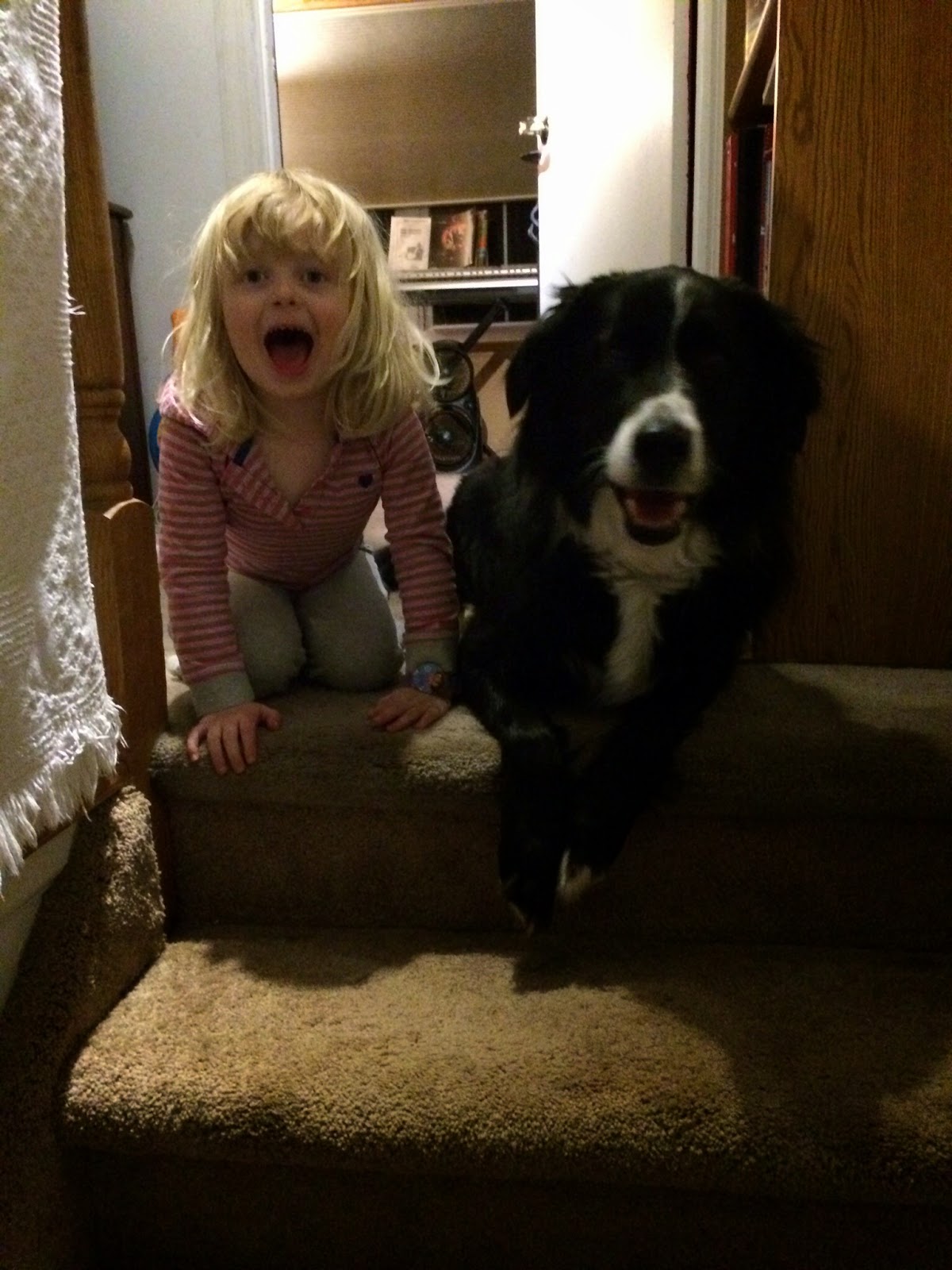 Waiting at the top of the stairs.  Sadie sits like this, with her paws hanging over the edge, waiting for me to come back upstairs.  Allie has this "other personality" that she calls Tutu.  Tutu is a dog.  It's not as fun as it sounds like it would be.  Like when Sadie poops outside and Tutu wants to drop trou and take a dumper on the front lawn next to her. 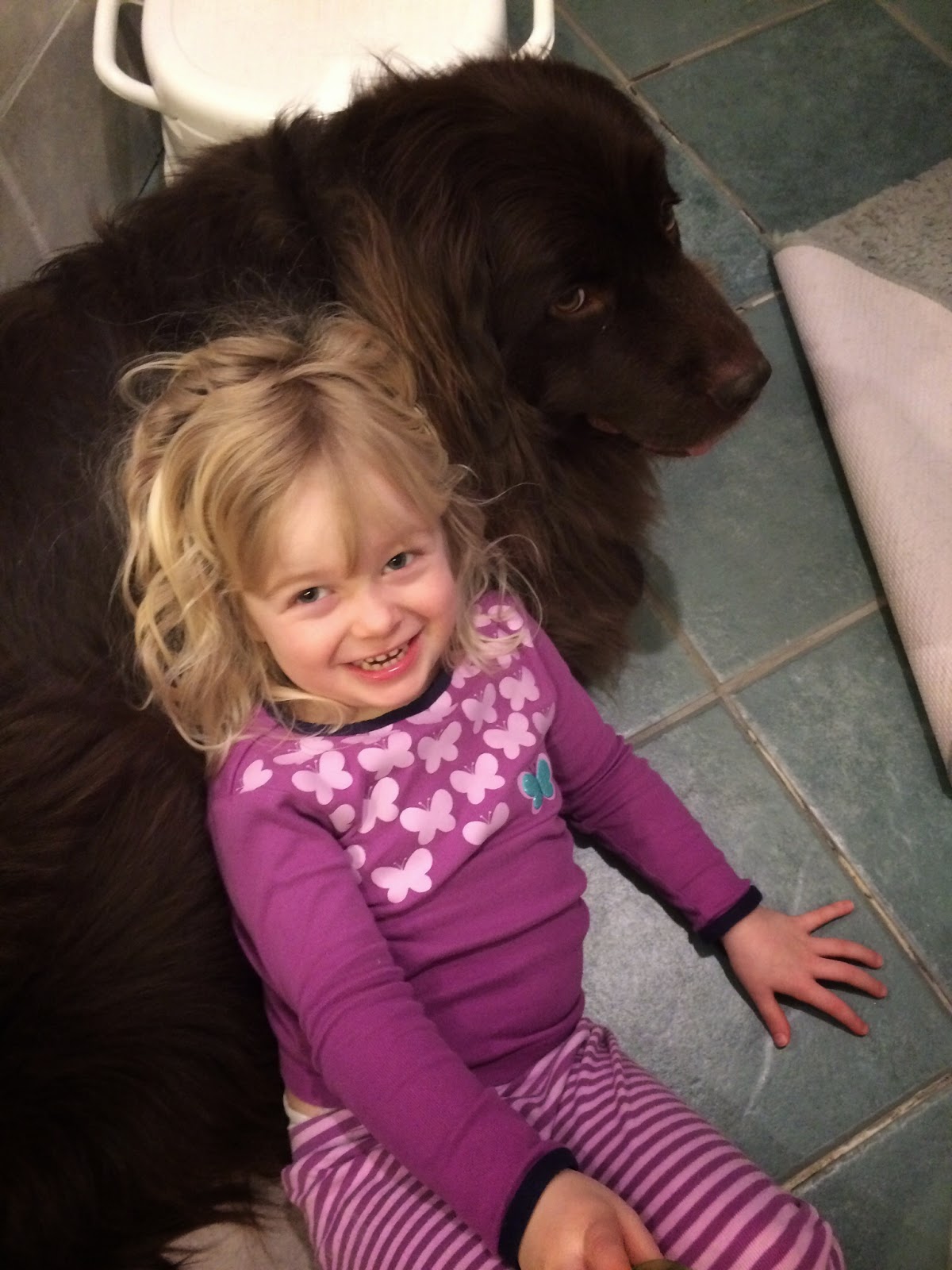 Lulu.   I just love Lulu.  She's a big brown Newfie who I walk every day and stays with us on occassion.  She is the ultimate baby sitter and I think she'd even let Allie put a saddle on her and ride her around the complex if she wanted.  (She does want to, but it's not going to happen.) 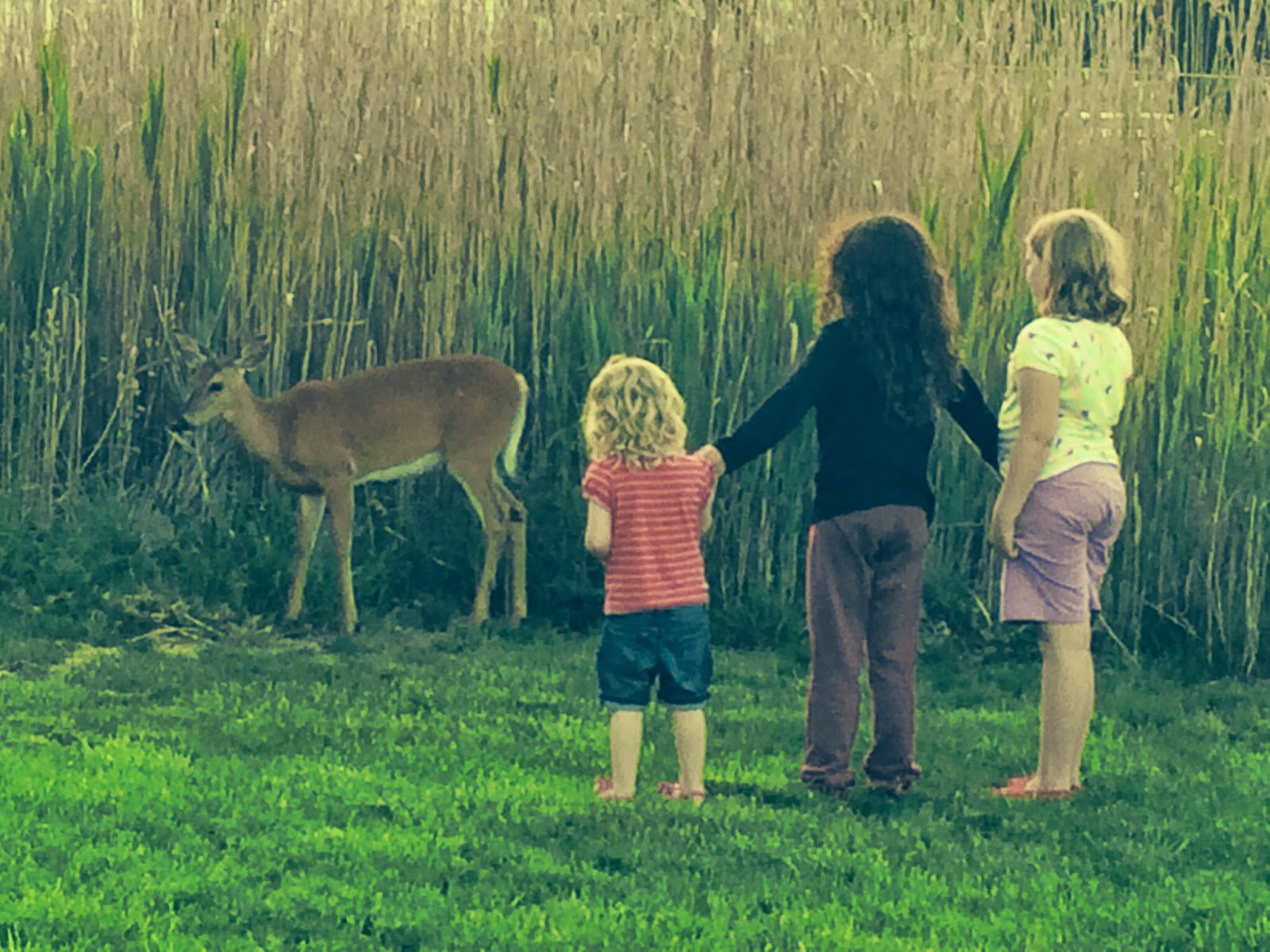 Our complex has its own herd of deer.  (okay...it's not a dog photo, but my kid is in it!) They are so friendly and walk around the lawns and streets like people.  It's not unusual to see a doe with a few fawns walking down the middle of the street and taking a left to go to the park.  It's outrageous.