One more reason why I shouldn't be a mechanic

There was an "incident" the other day and when it was over, the first thing I thought of was "I've got to call my Mom and tell her about this."  When that thought pops in my head, I realize that I have to ask myself the question, "Is this blogworthy?"  If so, I stifle the story and share it with you and her (HI MOM!) right here.

It's difficult to get "tone" across in writing, so I should mention that there were some specific changes in tone as this story progresses.  With my side of the story, there was: calm and relaxed; panicked; scared screechy (two pitches higher than normal); and then howler monkey freak out (five pitches higher and barely audible).  Justin only had mellow, annoyed and pissed.  He's much less dramatic in situations like the one you're about to read.  I'll let you know as the tone changes in the story.

I'm driving from one job to the next in one of the cars that Justin is selling (a lovely Oldsmobile Aurora), and talking to him on the phone.

Justin: So, what else is going on?

Me (calm): Just driving to the next job.  By the way, did you know that this car needs oil? 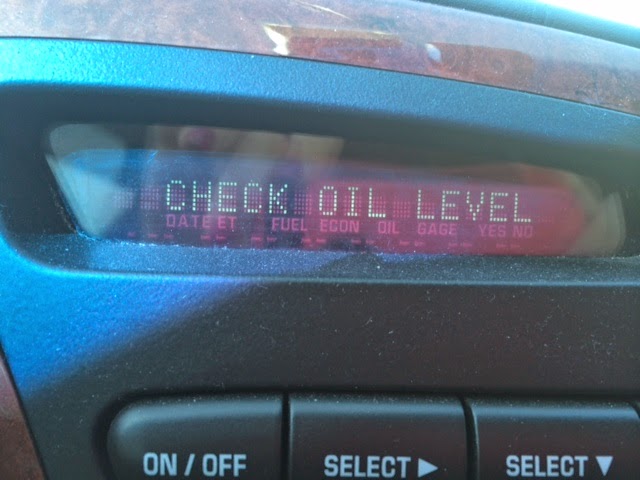 Justin: How long has that been on?

Me (panicked): Yes.  But it's only been three days.  The last time my other car needed oil you weren't in any big rush to do anything!

Justin (annnnnnnnd we go right to pissed): Don't even get me started on the last time..... You can't be driving around like you do for three days with the oil light on!  It's telling you to check the LEVEL.  That means it's running out.   It's not saying that you need to CHANGE it.

Me (scared and screechy): I know!  I know!  I'm heading for the Quick Check right now!

Justin (trying to calm down): Okay.  You're going straight there?  Is Quick Check the closest place?

Me (full fledged howler monkey): YES!  OF COURSE IT IS!  DO YOU THINK I'M LOOKING FOR THE FURTHEST ONE?  I'M NOT A COMPLETE MORON!"

Me: WHAT IN THE HELL.... DO YOU THINK I'M AIMING FOR SHIT WHILE LOOKING FOR THE FURTHEST GAS STATION?!

He's a smart man and knows when to shush up.

Me (scared): My driving skills are seriously impaired due to all of this pressure.

I hear muffled chuckling on the other end.

Justin (calmly): Do you know what kind of oil to get?

This is when my father rolled over in his urn.  I was driving like a 90 year old lady in rush hour traffic, about 3 inches from the windshield and white-knuckling the wheel at ten and two.  Clearly, I was stressed, so I just blurted out what first came to mind.

I know full well what WD-40 is and I know it's not an oil grade, but I was so busy wondering if I was going to make the engine go kablooey that I didn't put much thought into my response.

Justin: ....seriously impaired due to this pressure.  I know.  Call me when you get there.

For those of you who know me well, you know full well that I didn't call him when I got there.  I wanted to figure this out myself so I could redeem myself for ANOTHER oil faux pas in ANOTHER vehicle.  I popped the hood and imagine my surprise when I saw this: 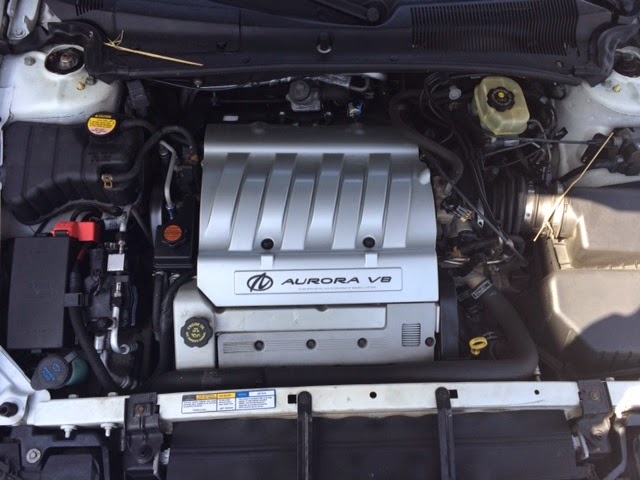 There is a chance that you won't be able to see it, but everything is labeled!  Even the oil dipstick....
I'm really surprised that Oldsmobile isn't booming because they've got it goin' on under the hood.  Any moron can find the stuff that they are looking for.  And if the moron can't find it, that means that it's too important to let an idiot know where it is for fear that they might screw it up!  They hide their significant shit.

I was all too pleased to find this little gem.... 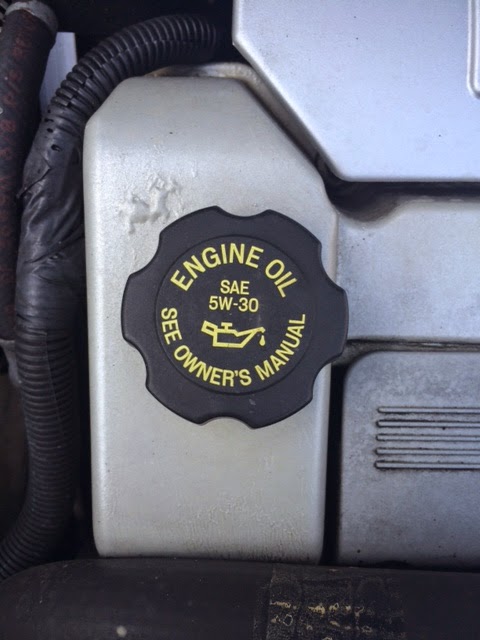 Lookee there!  They tell me what type of oil I need to purchase!  A bit o' 5W-30!  They couldn't make it any clearer.  And if I was still confused, they told me to check my owner's manual.  (If you need to refer to the manual to add oil, you shouldn't be driving.) 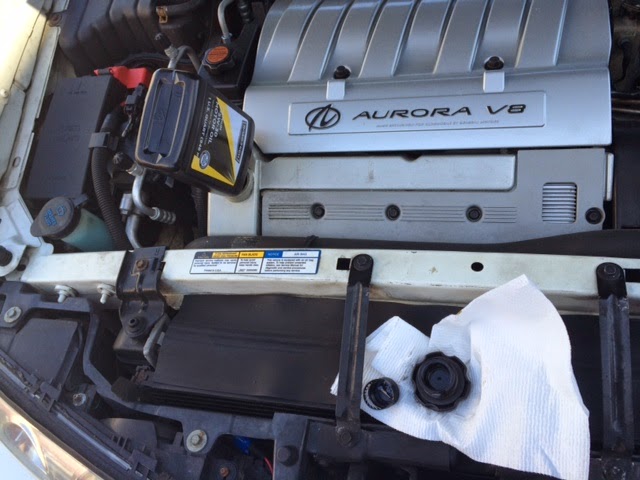 So, I bought my oil, popped the hood right there in the parking lot and began pouring.  The irony of this entire situation is that I was taking the above photo to send to Justin to show him that I was SOMEWHAT capable of SOMETHING automotive, when I heard, "See honey!  A real woman knows how to check oil and put some in if it's needed."

I turned around and saw an older gentleman sharing this gem of wisdom with his little granddaughter.  If he had any clue about what had happened in the 15 minutes prior to his comment, he would've shut his trap and kept walking.   If maintaining the oil in your vehicle is an indication of whether you are a real woman or not, I'd have to say I was pretty much on the same level as his granddaughter. I wish you happy and safe travels, my peeps!

It's been a gnarly (bad gnarly, not good gnarly) few weeks after having my website hijacked.  There was some anger, followed by a bit of anxiety, wrapped up in a good amount of grieving.  I couldn't believe that after 70 blog posts, some jackass was going to snatch my website right out from under me!

I was virtually violated, dammit!

I give Google credit though.  I gave up way before they did.  As of yesterday, Amanda and Carolina from Google Support were still calling to work on the issue.  Those Google Girls are die hard.

Alas, my broken heart and I had moved on already.

After picking a new name, I gave GoDaddy the boot and went to my original web geeks from back in the "xlinxs" days..... 1and1.com.

Just to let you know how THAT went, it took 5 minutes to order a new domain....and three days to get it to connect to my damn blog!  Words like Subdomain and CNAME were flying around and I was totally winging it.  I created and deleted more Subdomains and CNAMES than you can imagine and I still don't understand why they are so important.  Why do they let the clueless do this type of crap?  I needed help!

I hope that Anton from Belarus enjoys the hell out of flipsidemom.com.  He was very diligent about whisking that sucker right out from under me without me knowing.  I totally didn't see THAT coming.  And he was a total douche bag (sorry!) about trying to sell it back to me.

I'm sure he didn't expect me to say, "Kick rocks, mutha flucka!" in response to his shyster tactics.  I hope he falls down and hurts his perineum really bad.  And he should have something partially exposed and permanently lodged under his hyponychium as well.  Something that would get caught on almost everything and recreate horrible pain!

So, with that, I bring you www.TotallyTrueStory.com.

When we first met, I used to tell Justin stories about my crazy shenanigans that happened before I became his betrothed.  He would look at me like I was making it up and I would respond with, "True story" in a very matter-of-fact fashion.

Why, yes, I do have some doozies in my history that might be met with disbelief.  But I have fellow participants, witnesses, bystanders and spectators to back them all up.  And if it all seems too far fetched to be true, let me introduce you to my friend Audrey who has shook her head and said, "Only Vicki" more times than I can count.