Another Door In the House??

Can you believe it?  2016.  Who woulda thunk?  I can remember when 2001 seemed like a futuristic date and we have breezed right past that one at least 15 times.

I'm still writing that book.  Yadda yadda yadda.  I won't bore you with details.  Holding a printed copy with the words "Published 2016" inside is my big goal for the year.  I feel like I'm giving birth.  The amount of research and writing and rewriting and editing and cursing requires about the same amount of effort as it was figuring out what being pregnant was all about.

This evening we finished dealing with our Christmas gifts.  Actually, let me preface that by saying that Allie's gifts were OUR gifts this year.  I don't think there was one thing that she got that either Justin or I were not excited to play with.  I'll tell you about the imported puppet theater that my mom got for her another time..... but I will say that I was so excited about it that I was the first one to have a hand rammed inside of a puppet's ass when Allie opened them.

We had a very slim Christmas.  Funds were low, so Justin and I agreed that we shouldn't get each other anything. After all, we pretty much have everything we need.  And what we don't have, we can just buy for ourselves.  Instead we directed our giving to our daughter, niece, nephew and the parental units.

It was freakin' awesome!  The stress was minimal.  No scrambling.  No overspending.  We just focused on Allie's enjoyment.

The best gift I got this year was a small taste of what the "financially impaired" people do.  Other than discount shopping for gifts and cutting out "the luxuries", the most enlightening moment was buying coffee with dimes.  Yep.  Dimes.  And it didn't even embarrass me or piss me off.  Instead, I had this lightbulb moment where I thought, 'When we get back on our feet, I don't ever want to forget what this is like."  And that was the best tasting cup of coffee I think I ever had!

So back to this door/gift situation.....

Way back in September, my friend, Rose had sent me some information via Facebook about this adorable thing she found..... and that she thought Allie would like: 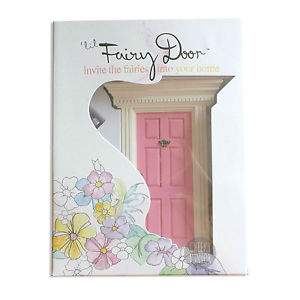 How stinkin' cute is that?  Allie loves it!  She received it as a Christmas gift from her pain in the ass elf on the shelf, Elf Annette.  And in true parental style, we decided to use it as a tool of manipulation. 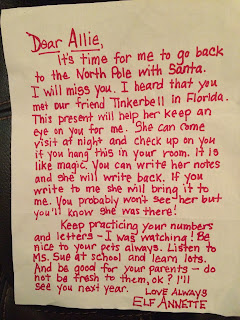 Anyway, as with anything crafty that I do, I have to be a giant pain in the ass and super fussy about how it will look.  I did research on Pintrest about different ways to display them, and then contacted them directly and annoyed them a little bit, and after she got the gift, I spent 5 weeks trying to find the "perfect shadow box" to use.

This evening, after the 7,482nd time that Allie asked, "When are we going to install my Fairy door?  Can we do it now?" we finally gave in decided that the moment was right and did a Fairy door installation.

There is now an additional door in my home in which small winged creatures, of the non-insect persuasion, can spy on my child and exchange notes on the sly, all while leaving sprinkles of sparkly fairy dust which will surely end up stuck to my dog's super fluffy tail.   And I will the Fairy will  probably have cramps in my her right hand from writing on the teeny-tiny itsy-bitsy super-small note papers they give you to put in the mailbox.  BUT.....  it's all seriously cute, and she loves it, so it's worth it.  SCORE FOR AUNT ROSE!!!

Justin was a champ about installing the shadow box, door and mailbox.  The door and accessories themselves were very easy to install.  It's all velcro and tacky adhesive that attaches easily but doesn't seem to ruin the paint when you remove them.  Modifying and making the shadow box removable yet sturdy was probably the only part that required work.  And despite the fact that I did the whole "an inch to the left......now up a bit.....too far, move it down......it's crooked..... now it's crooked the other way" thing, he didn't yell or throw his screwdriver at me!

(Although, when he finished and I took a photo of him and Allie next to the door, I DID sense some tension on his face.) 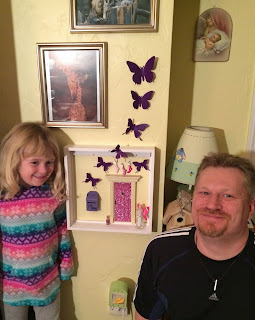 He's a gooder.  I'll keep him.  (Plus, he played "Elsa and Anna" with Allie today and he didn't give me the "this is hell, please save me" face even once.... major good dad points there!)

Here's Allie with her door.  She was so excited and is already writing up teeny notes to leave for the Fairy.   I'm sure I'll be posting this on the company's Facebook page. 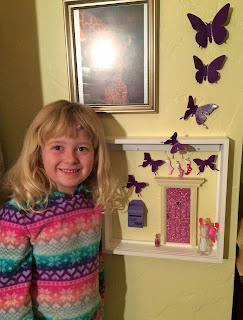 The company is in Australia, but other than the 2 week wait time for shipping, they are wonderful to deal with.  And the US to Australia exchange is great!  Santa paid less than the prices listed.  If you would like to check them out, here is their webpage  The whole concept is just adorable! It's the Lil Fairy Door company.

Valentine's Day is around the corner.... I'm guessing that the Fairy will be required to leave chocolate for Allie this year.  I'm praying that this won't become as frustrating as Elf Annette is/was.  However, knowing that little pain in the ass precious being, if the Fairy is a friend of Annette's, she will be just as high maintenance as her elfish buddy.

Wishing you all a very Happy Valentine's Day!