I feel like I've been writing a lot about death lately.  That kind of freaks me out a bit.  It's been a haunting topic the past few weeks.  Most of it kind of funny.  But for some reason, it's been touching my life a bit more seriously.  And I'm speaking beyond the death of Mr. Mouse and my husband traveling with dead people.

About eight  years ago, I had a large spurt of loss going on around me.  Friends died, my neighbor died, my friends' pets were dying and, oddly enough, I was taking a course called Death And Dying at school.  It seemed to be taking over my world.

There was a photo at the start of my class' textbook that I was drawn to.  I had been wanting to get another tattoo for a few years but I wanted to wait until something meaningful came along.  When I realized how often I looked at the photo, that's when I knew it was time.  I found my last tattoo.

These are photos from the day I had it done.  Keep in mind that it's the same tattoo.  If you look at it one way, it says Death and if you turn your head, it says Life.  If you don't believe me, just flip yourself....or your screen, which would probably be easier.  I took all of the hard work out of it for you and just flipped the camera.  I'm nice like that. 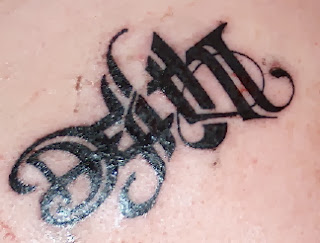 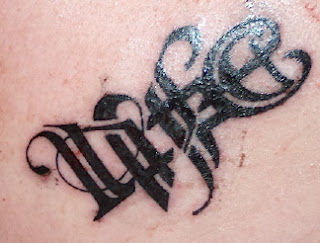 I love this tattoo.  It really represents something to me.  Life and death are so interchangeable, inescapable, and you can't have one without the other.

Little did I know that it's also pretty popular amongst the prison population, but I'm okay with that.  Coincidentally, I was in school with the intention of becoming a prison psychologist.  Sometimes the strangest crap happens to me.

So, this Tuesday I woke up to find a text from one of my customers saying that one of her two dogs had died suddenly during the night.  I have been seeing these two boxers almost every Monday thru Friday for nearly five years and when I tell you that this boxer was the most excitable ball of energy I've ever seen, I'm not kidding.  He was in non-stop play mode.

Sweet Jameson was only seven when he died.  He had an undetected brain tumor and got very sick over the course of 12 hours and the animal hospital was unable to save him.  His humans don't have human children so the dogs are their babies.  As you can imagine, they are just devastated by the loss.

Allie heard me talking to Jameson's "mom" on the phone that morning and on the way to school, she asked me what happened to him.  I can't even remember the answer I gave her.  I know it was sucky because even I wasn't sure what I was talking about.

Then we passed a cemetery.  "What are those rocks," Allie asked, referring to the headstones.

What are the chances that after passing that cemetery nearly every day for her entire life, that she would suddenly notice the headstones right as we are discussing death?  Apparently, they are odds are pretty good.

"Those are headstones or grave markers.  They put them over the graves of people after they are buried."

Shit, shit, SHIT!  This was not the best conversation to start during a ten minute ride to preschool first thing in the morning.  And I was entirely unprepared to explain death and burial to a child already.  After all, I hadn't done all of the neurotic necessary research that tends to accompany serious child related issues.  Why wasn't I one of those parents who could come up with just the right thing to say about stuff like this without totally freaking her out?  I could come up with a fake bedtime story with no problem, but a REAL answer about an important topic was a stumper for me.

"What do you mean die?" she interrupted.

"When people go to sleep for a long time...."  Already I was screwing up.  I remembered that I had read awhile ago that you never compare death to sleeping when explaining death to a child.  They might be afraid to fall asleep after that.

Just then, the car in front of me slammed on the breaks as the light turned red.  What a freakin' blessing THAT was!

"Mommy, red means stop."  Allie has the attention span of a goldfish sometimes.

I'm no fool.  I was NOT prepared for this parental death test and I saw an out. "That is exactly right!  Red means stop!  And do you know what green and yellow mean?"  I was very enthusiastic about this new conversation regarding traffic signage.  I was grabbing the opportunity to dodge the death discussion and hanging on for dear life.

I don't know if there is a proper age to explain death to a child when it doesn't accompany a personal experience.  I will have to obsessively research this one.  However, if you have any good information to share, I'd love to hear it.

Have a good weekend, my dear bleeps!  (blog peeps)