This is probably one of the most personal things I’ve ever discussed publically, but now is the time to do it.   Amongst the death of yet another celebrity due to Fentenyl usage, I am blessed to find cause to celebrate.

I imagine you've heard the news about the opioid epidemic in America. You may have heard about Prince and Tom Petty, both of whom were prescribed this powerful narcotic for their pain, only to die from accidental overdoses.   Chances are that you thought that they were taking it to get high and that’s how they overdosed.  I’d bet the bank that the true story is something entirely different. I'm guessing that it's actually an extremely sad ending to a very common situation.

Perhaps you know someone who had multiple back surgeries, like my husband did, or maybe a cancer patient who is in terrible pain and has one of those Fentanyl patches on their body.  Or maybe they wear multiple patches, like Justin did.

Justin is one of the few lucky ones to have a happy ending to his opioid story.  As of a few weeks ago, following seven years of wearing Fentenyl patches for pain management, my husband is finally free of it.

Unexpectedly, Justin wasn’t the only one wearing that patch for all of these years.  His family wore it too.  Part of my vlog below touches on this story.  (If you don't automatically see the video, click here)

And in regards to the coffee I raved about at the beginning of the video, you can request a free sample via my Facebook Page by clicking HERE

Wishing you all Peace and Love!
xoxo
Vicki
Posted by Vicki at 7:21 PM No comments:

It's been an interesting bunch of days here at the Wolf Den.  Lots of changes and discoveries and stuff like that there.  2018 has already got things movin' and shakin'.

If you're here because of my Facebook post earlier today, welcome!   I'm going to tell you about what was in my cup.    And pssst....guess what....

(I swear they have a Friends meme for everything!)

I promised that I'd share this new discovery and the easiest way to accomplish this task is two-fold.    First, I'm going to make you listen to me talk about it because it's just too much to type here.  Plus I'm all jazzed up with excitement about finding something so awesome.  After years of fighting sugar cravings and praying for help, I feel like I found a miracle!

I did some research and development (R&D = drinking the coffee) and I feel like it's time to share.  Here's how we're gonna do this:

Watch my video, full of love and information (and I completely forgot about the super awesome part until the last damn minute, but I managed to get it in there!).  Then take a look-see at the photos below. They expand on my chitchat.

And after that, if you're as intrigued as I was, go to the website to get even more info and find out how you can get magic beans too (click here!).

So, hang on....you're in for a great ride, especially if you've been dealing with the same issues that I have.

And here are the photos I promised.  As I said, I can't do the Sciencey stuff and....well....someone already did it for me, so I'm just going to post what they wrote.  Thank you PR people!


In case you missed the website above, here it is again https://elevacity.com/139685

If you have any questions, let me know!  Until next time......
xoxox
Vicki

SaveSave
Posted by Vicki at 7:15 PM No comments:

Isn't it such a relief that in 2018 almost every financial transaction that we make is now electronic??  This relieves us of the frustration we used to feel at the beginning of each year when you'd write the date wrong on all of your checks and then have to put your initials next to the scribble where you tried to fix it instead of writing out a whole new check.  Oh, the needless check wasting!  (That used to fry my arse every time...grrrrr!) 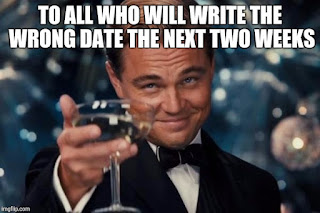 So, did you make a resolution for the New Year?

What'd you resolve to do?

Does it have anything to do with a diet or exercise or eating better or working out?

If so, good for you!  I've failed at the New Year Day Diet resolution too many times in my 44 years to risk it.  I feel like I'll jinx myself if I try it again, so I did the obvious thing.  I started on December 31st instead.

On the morning of December 31st, I got on the scale and looked at the food in my house  and said, "Well, let's leave this disaster in the past, shall we?"  That day I went back to the healthy eating that I was doing with everyone in October and November.  My holiday anti-sugar sabbatical is O-VAH.

Sugar done me wrong AGAIN, dammit.  It makes me so angry!  Cuz I was so SURE that sugar had changed just in time for the holidays and would no longer give me anxiety and crabby moods and inflammation and a bloated gut.  I had detoxed from sugar with you all before Thanksgiving and I just knew that some miracle had to have occurred that would allow me to eat sugar and feel fabulous.

As stupid as that all sounds, what else could I have been thinking when I started eating the desserts and treats and candy?  Huh?  What?  I ate much smaller quantities of sugar (and not one damn latte....  score for me!), but I was still putting it into my body and expecting different results from the past.

By now you all know that the definition of insanity is doing the same thing over and over and expecting different results, right?  Well, my thoughts that eating sugar, albeit in much smaller amounts, would suddenly be okay for me was just total insanity.  I am a person who is negatively affected,  both mentally and physically, by sugar in all forms.  This is a fact.  It's equivalent to being an alcoholic and thinking that you can just have one drink here or there.  Actually, here's one from my past.....

When I quit smoking cigarettes, the best piece of advice I ever got was from a limo driver on the way to the airport.  He told me that I had to be done forever to be successful.  "Don't ever look at a cigarette and think that you can just have one or two and go back to quitting.  It's not possible.  You weren't a social smoker.  You smoked every day.  You need to be done forever.  Quitting means quitting, not pausing."

A year later, I was entertaining fellow employees who were visiting our New Jersey office from California.  They were young and fun and wanted to go out for drinks in Manhattan.  Our company gave us a car and driver and off we went.  I also went off of my Quitting Wagon the minute the girls lit up their Newport Light cigarettes.

"Want one?" they both asked simultaneously.

I had already consumed a few alcoholic beverages and, being the lightweight drinker that I am, I succumbed to peer pressure and lit up.  (Yes, I know it's not actually peer pressure, but in my head I was trying to be part of the gang and peer pressured myself right into it.)

I didn't smoke one or two or ten.  I smoked a whole pack of cigarettes in just under 4 hours.  Yup!  It tallies up to one menthol cigarette (which I never smoked before, by the way) being lit every 12 minutes.

Afterward, spent an hour in the bathroom at Sushi Samba trying to make myself throw up because I had actually given myself nicotine poisoning.  I was nauseous and dizzy and kneeling on the floor of one of the tiny little rooms with a toilet in it,  holding myself upright with one hand on each wall, praying (PRAYING!) that I would vomit or die as soon as possible.

For the record, I did go back to smoking again for a few months.... until I moved into a smoke-free apartment.  Nothing squelches a desire to inhale carcinogens and tar like standing outside at midnight in blistering winds and single digit temperatures while shaking in your jammies and trying to keep your cigarette lit.  EFF THAT!

Here I am, a decade later doing the same thing with sugar.  It's just like giving up any bad habit; you need to struggle and just quit....not pause.

In true dieter's fashion, I took photos on December 31st too.  No make up.  No special outfit to attempt to hide my chubby spots.  And if it hadn't been so damn cold, I would've put on shorts and a t-shirt.  I have one of those photos from the fall and things don't look much different now, so I'll have to dig that up.  But here I am! 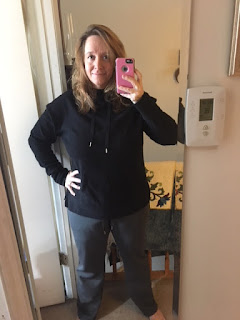 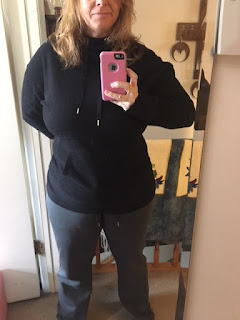 I'm not going to throw a weight number out there or list my measurements.  (I will say that I'm a size 14 for comparative purposes - lol)  I didn't want to get distracted by my scale.  Here's how meaningless those number truly are..... Someone told me that they always weigh themselves before and after they poop in the morning.  Why?  Because the number AFTER they pooped was always lower.  So, my question was, "Are you aware that neither of those weights are your actual weight then?  Because all day you fluctuate..... poop builds up, poop comes out.....it's just a mind game that you play with yourself to see a better number and think you're lighter."  It's totally equivalent to when I get on the scale and then get off and shush it across the room with my foot and get on again, hoping for a lighter number.  And sometimes it is!  Which one is more accurate?  Who the hell knows!

At this point, I'm really aiming for visual change.  More so, I want to FEEL the change.  My knees stopped cracking after I lost the 10lbs in Oct/Nov.  But my body still aches.  I want the rest of me to feel better too.

I would also like to lose the back fat.  It's just unsightly.  😩

Anyway, here's a little rambling message from me (as if I haven't said enough already, right?)  Happy New Year!

I apologize for my mispronunciation of Ghiradelli.  I just couldn't go back and record the whole thing again because of it.


ps. Just in case you weren't already aware, we don't say "Happy New Years" or write "Happy New Year's".  It's Happy New Year.  No "S" And for God sake, keep the apostrophe out of it!  You're welcome.