It is here that I shall introduce my therapist to provide you with an amusing anecdote in reference to the previous topic (identifying with men).  My therapist, Dr. Steve / Steve, is amazing.  He is the best EVER.


No, no.  I cannot give you his contact information.  He's way too busy helping me keep my shit in check to take on additional clients.  Plus he's super fabulous,  and everyone knows that when you have something good that the public has access to, you should hoard it and make sure you don't lose easy access.

I started going to him years ago and I currently have him under contract to get me through menopause before he can officially retire.  (This contract is really me just threatening to behave like Bill Murray in What About Bob.  I'll stalk his ass if he tries to escape). One of my main purposes for seeing him is that I frequently need a male interpreter.

Yes, you read that right.  A male interpreter.  And who better to interpret men but another one of 'em!

Clearly, Justin speaks English (and only American English), but what men say is not always to be taken literally.  Actually, this goes for women too, but I'm okay understanding and deciphering what my fellow beyotches are saying.  Men, not so much.

At least one time per session, I throw my hands up, totally exasperated, and go, "Oh my gawd, Steve.  What the fuck does THAT mean?  I need the manterpretation!"  It's usually after I tell a story about something that is going on with me and Justin that I'm not sure what to do with.  I've got a ton of stories, but I'll share the most recent one with you.

Before I divulge this VERY valuable information, I need to clarify that I use this source of man knowledge for good, not evil.  I want to understand what Justin is telling me.  Sometimes his actions speak volumes and I can't get past the first line cuz I'm a girl.  I'm not looking to find out what he's all about and then use it against him.  This isn't a map for war.  It's like our own little marital NATO.

So, the last time I went to see Dr. Steve I had a more lighthearted issue to present before I left.

"I understand that Justin spends all day with a two year old and he really doesn't have a lot going on because of his injury, but when something happens I have to get the exxxxxxxtra lonnnnnnnng drawwwwwwwn ouuuuuut version."

"What do you mean?"  I think he knew where I was going with this but needed to be sure.


"If something happens during the day, and he needs to tell me about it, I get the dragged out version.  I can't get the quickie version.  Noooooo.  I get this version:

....and then I told her exactly what was wrong with the phone and she said that I needed technical support so she put me on hold.  She left me on hold for a really long time and I was about to hang up but then she picked up again and told me she was going to transfer me to tech support.  Of course she disconnected me, so I had to call back and now I'm like really pissed.  So, I have to go thru the whole rigmarole again and they go to put me on hold and I told them that if they disconnect me that I'm going to cancel my contract so I want someone to wait on the line with me.  But does she do that?  No.  She puts me on hold and sends me to technical support and then THEY put me on hold and I'm waiting so long that I was able to make Allie peanut butter and jelly on TOAST.  That's how long I was waiting.  The next person picks up and do you think they told him why they were transferring me to him?  No.  So, I had to explain it all again....."

OH MY GOD, STEVE!  I want to lose my mind!  It's reached the point where I have to interrupt him and ask him to give me the abridged version before any more of my brain cells die of boredom.  How in the hell do I deal with this without hurting his feelings?"

He stared at me in awe and said, "I think that in all of my years of doing this I have never had a woman come to me with this problem."

Now, most women might be offended by that, but let's be honest here.  Women, as a group, are notorious for rambling on about things that men have absolutely no interest in.  I admit that I have been guilty of this crime.  And usually I get offended when told to get to the point.

If I'm feeling bitchy enough, I might even say, "Forget it.  I wouldn't want to bore you!"  We all know that statement is used in hopes that the other person will realize the error of their ways and beg us to tell them the rest of the story that they just complained about having to hear.  It's a form of Female Retaliation, and I'm not proud to say it, but I have used this weapon....a lot.

Dr. Steve put his mug of tea down, resituated himself in his chair and prepared to do something that most men might not care enough about marital success to risk sharing.  "You can't make him feel bad about telling you about his day.  You need to find a way to get through it."

The last thing that I needed to do to a man who was desperate for some kind of excitement was to belittle whatever little excitement he came across.  And I needed to keep him focused on problem solving and normal life events.  For awhile he was desperately seeking excitement and drove around with dead people that he found in a dumpster for about a week until he found a respectful way to dispose of them.

(Yes, I said dead people.  They were in boxes.  Cremated.   And he found them tossed in a dumpster at his storage facility.  The story is so priceless that I need to reserve it for another time.  Remind me and I'll get to it.  He has a penchant for silliness when it comes to traveling with the deceased.)

It was at this point that Steve shared something with me that I will be sure to share with Allie when she gets much older, because it's a precious glimpse into man thinking.  "You need to listen and if you start feeling anxious because the story is getting a bit too long, you need to drift.  But don't make it obvious that you're drifting.  Start thinking about other things, like what you need to do later, and every once in awhile, come back and repeat what you just heard.  It's called mirroring. 'So, they put you on hold and disconnected you?  You must've been pissed!"  If you need to, just drift again for a little bit and come back."

Ingenious!!!  And, as Steve explained to me, it's far kinder than making Justin feel like the most important part of his day is something that I find to be incredibly mundane.  It's an option to offending him.

This is also something that men have been doing to women for eons and it's now been confirmed by one of them.  Not only confirmed, but also detailed.  Part of me felt like I had been given a glimpse into one of the Cave Churches of Manliness.  But the other part of me feels like I deserve it.  I'm playing in a small part of their playground (reserved for women, of course), so I should be able to at least see their toys right?  Right??!! 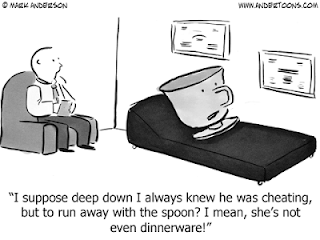 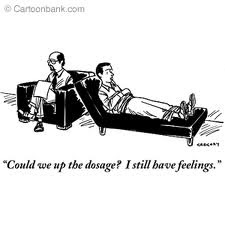 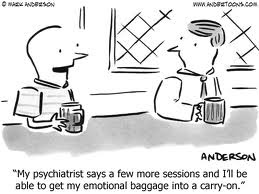