Hello. My name is Vicki and I'm a Tractopotomus too!

In case you are wondering what a "tractopotomus" was, it's not a real word.  I made it up.  Here is where it came from:

A few months ago Rex Reed wrote a movie review for the New York Times in which he referred to Melissa McCarthy as a "hippo", "tractor-sized" and "obese". In case you aren't sure who she is, she stars on the tv show Mike and Molly, she was in the movie Identity Theif earlier this year, and this month she will be in The Heat with Sandra Bullock.  If the name still doesn't ring a bell, here's a little photo for you 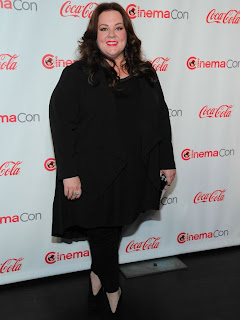 Melissa has daughters, so the results of how she responded to this whole experience with Mr. Imafuckingmoron Reed was going to be immense! (no pun intended...seriously)  It could affect her reputation, her career and, most importantly, her daughters' self images.

Here was her response to USA Today yesterday:

She said her initial reaction was that of shock at the notion that a publication would even run a review with such mean-spirited remarks. But she added that she has bigger, more meaningful things in her life to focus on.
"I just thought, that's someone who's in a really bad spot, and I am in such a happy spot. I laugh my head off every day with my husband and my kids who are mooning me and singing me songs."
She concedes that the criticism "may have crushed me," at a younger age. Plus, as the mother of two daughters, she sees articles like that as damaging to young women. The article adds "to all those younger girls, that are not in a place in their life where they can say, 'That doesn't reflect on me.' That makes it more true. ... It means you don't actually look good enough."


I love that she waited four months to respond to that idiot.  She wasn't giving him the power of an immediate reaction.  However, I would love to know how she handled the effects of the article at home.  You can be sure that someone, somewhere mentioned these slanderous comments to one of her girls.  If I heard someone say things like that about my mother I would run home and ask her why people would say such awful things.

I wonder if Rex Douchebag Reed thought about that.  Did he at any point think about the two girls who would hear this about their mother?  How about the potential damage he was doing to millions of girls and women who already suffer with body image problems? He must have! And he still said it.  That's just mean spirited and evil.

Here's another photo I would like you to look at:
That's Ireland Baldwin, 17 year old daughter of Kim Basinger and Alec Baldwin.  She's a model and, apparently, some people feel that she's too tall, fat and unattractive to be a model.  Her extremely mature response to this, via Twitter, was:

“I understand that I am not a size .008.  What I don’t fully understand, is what is the good in commenting on a photo of a 17 year old girl and calling her fat, ugly, etc? Is that helping you in some way? I’m confused,” she wrote.

Can you imagine the conversations she had with her mother after reading such negativity?  Can you imagine how much of Ireland's time was spent wondering if any of the statements were true?

From the time I was 11, I worried about my weight.  Now, children as young as five years old are concerned with dieting.  FIVE!  At five I was concerned about my brother not messing with my Barbies, when I could finally have a kitten, and why no one would mention that red frosting tasted hellacious before letting me eat it?

Thirty years later, I'm still stressing about my weight.  At forty I said that I wasn't going to waste another year of my life worrying about what other people thought of me.  I wanted to accept myself for how I looked, rather than compare myself to women on tv, in movies, in magazines, on billboards, etc.  Wanna know how that's working out for me so far?  So far I'm not skipping around singing "winner, winner chicken dinner, look at me so much thinner!"

I look at Allie, so sweet and innocent, and just shudder about the thought that in the near future someone will say to her that she's fat or ugly, and tears and heartache will follow.  I hope that she will believe me when I tell her that what they say isn't true.  I wonder if she will understand all of the reasons why people might say such hateful things, like jealousy or insecurity.

But if she's anything like her mother, she will still doubt and wonder.  I can STILL vividly recall the sting from a high school boyfriend saying my legs were too fat for the shorts I was wearing.  And I haven't worn another pair of shorts like that since.  That's how powerful words can be.

People are mean, as proven by Rex Womenprobablyalwayshatedhim Reed and Ireland Baldwin's critics.  What they have to benefit by saying these things is beyond me.  Do they feel better about themselves in some way?  Do they think sharing their opinion is so valuable that the feelings of others should be sacrificed in the process?

In regards to writers, I think it's an abuse of their status to make people feel poorly about themselves with their widespread words.  Twitter reaches a huge number of people as well, even if you are just a regular Joe.  You're abusing your Tweeting powers by being hurtful.  Use your powers for good, people, not evil!!!

The truth is.... that Melissa McCarthy is a bit overweight according to those who promote healthy standards.  But she's fabulous as a comedienne, actress, and human being.  I don't even see her body any more.  I see that she can make me laugh, which makes me feel better, so therefore I love her!

The truth is.... that Ireland Baldwin is not a size 0.  But I would've given anything to look like that at 17, 27, 37, and you can be sure I will still be wishing it at 47 and beyond.  She looks amazing.  I hope that she can find a way to continue to rise above the hurtful things that jealous people are saying.

The truth is.... that a few days ago, I was looking at Allie and her little belly was sticking out and I thought, "OMG, look at how cute that little belly is!  It's better to have that now instead of when she grows up."  Shame on me.  I was pissed that I even had the second half of that thought.

Hopefully, by the time she grows up, what's considered attractive will be something other than having next-to-zero body fat.  Dear Lord, may we please revert to the time of Marilyn Monroe and Jane Russell???  Of course, considering that both of Allie's  grandmothers were very thin people, she'll probably be thin too, and bitchy people will be yelling at her to have a sandwich.

Hmmmmm...so, let me change that to Dear Lord, may my daughter never suffer from a poor body image and know that she is forever beautiful.  From the gospel according to Vicki.  Amen.