Take a moment, sit back and think where you were eight years ago.  The summer of 2005.  Where did you live?  Who did you live with?  Did you work?  What car were you driving?

George Dubya Bush was still president, Hurricane Katrina devastated New Orleans, Pope John Paul II died, gas was $3.07 a gallon, London was bombed by terrorists, Michael Jackson was found not guilty on fourteen charges of various child abuses, and I was head butted by a cow.

A bull, to be specific.

On Father's Day weekend, I revisited the scene of the crime.  The Bergen County Zoo in Van Saun Park.  What a liberating day that was.  I confronted my fear of bulls and left a new woman.

Eight years ago I was dating someone else and we had been on a zoo kick of sorts.  I had a season pass to The New York City Zoos, but we had a soccer game that afternoon so we decided to hit a local zoo.  The Bergen County Zoo is no Bronx Zoo, but it's pretty, clean and has some nice animals on display that you might not find in your back yard.

Within five minutes of entering, we approached the farm animal display.  There was a bull hanging out by the fence and he was, like, right there.  I grew up in a town with cow farms, so a bull was more familiar than it was riveting.  But I had never really touched a bull.  We drive by our cows.  Rarely do you think to pull over and pet one.

By the way, if you pass a cow pasture, chances are that if you pull over and walk up to the fence the cows will mosey on over and say moo.  Cows are really friendly that way, and you see steak in a whole other way after chillin' with the bovines up close.

Back to the zoo.  That day I had on a Tiffany bracelet.  You know, the silver chain-link ones that have a heart charm attached.  I walked over to the bull and reached out and put my hand on his back.  The bugger didn't move!  To me this was an invitation to pet him.  And so I did.

What I did not do was to factor in that my bracelet charm was going to be lightly grazing the bull's back.  I was so excited that this bull was leaning against the fence so I could pet him that my accessory situation wasn't even a thought.

Mr. Bull thought my charm was a fly and when he swung his head around to shoo it away, one of his big fat horns whacked me right in the forehead.

The things I remember about that moment were being shocked and unsure of what happened, feeling like my brain had slammed against my cranium, dizziness that wouldn't stop, followed by hugantically gianormous pain on my forehead.  I stumbled around a little like a drunk person trying to right myself.  Through blurry eyes I was looking for the person I was with.  I felt like someone had spun me around 20 times and then set me free so it took a few moments to locate him.

People saw this.  I know because they were still gaping at me when I finally collected myself and got my synapses firing again.  And the person I was with stared at me, stunned.  And I think he was wayyyyy embarrassed, but I'm sure he would never admit it.  How do you mock someone when  a tennis ball appears to be burrowing out of their brain through their forehead?  I had a serious lump.

What I also had was a kick ass story to tell for the rest of my life.  How many people can say they were head-butted by a 2500lb animal?  That's over a ton of breathing beef, people.

Back to 2013.  Justin has heard the Vicki vs. The Bull story a few times so I think he was interested in seeing the scene of the crime.  Imagine my excitement when I found the following sign on the bull display: 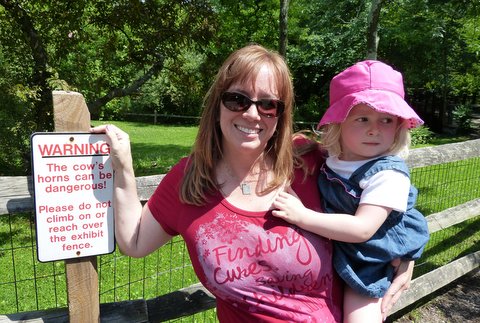 I didn't see the bull at first.  I thought may be he was dead by now.  But then I located him and CLEARLY he had spotted me first because check out the distance he kept: 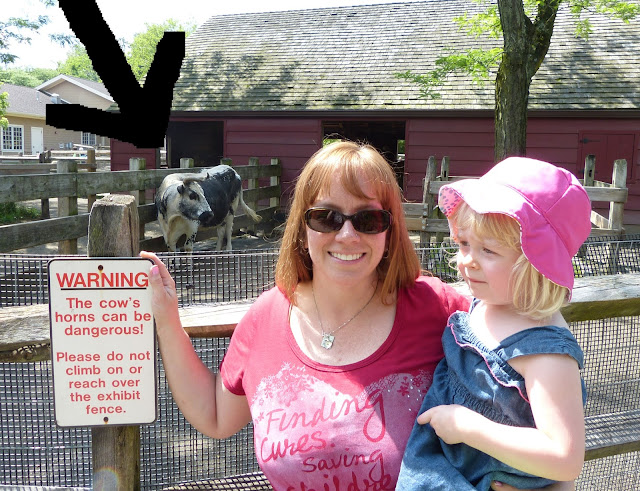 I have provided an arrow pointing to said bull just in case you feel he actually achieved the "blending into the background" feat, as he was attempting to do.  That fella in the far left is the one that assaulted me as I was issuing him some kind attention 8 years ago.

And I see that they now have multiple warning signs near the cows.  Apparently, I'm not the only idiot out there who didn't consider the double fencing enough of a warning to step back.

After taking the silly photos, I took a moment to stop and look around.  Being there in that exact spot  got me thinking about how different my life is compared to 8 years ago.

I lived alone in a studio apartment in New Jersey, slaved for corporate America five days a week, dated someone with four kids, and was very unsure about my future.  Now I live in New York, running my own little business, married with one child of my own, and I'm only a little bit unsure about  my future now.

It was surreal to go back with my little girl to show her the animals.  I never would've thought I would be doing this in 2013.  I was in a totally different world  for me back then.

This visit really put a spotlight on exactly how my life has changed.  The most poignant difference was that now I had a daughter.  Children change your life in every way, from what you do to how you perceive it.   Something you've done twenty times alone is a whole new experience when your child becomes involved.  The zoo was suddenly brand new to me.

I know love on an entirely differently level than I could have imagined in 2005.  Now I see things through her eyes.  She has taught me that all of the things that I took for granted years ago are now bright, shiny and exciting again. Even going to the zoo, which I always loved doing, is full of amazements because of her. I am very pleased with how it all turned out.

The highlight of the experience with Allie and the cows was when she looked at me and declared, "Mommy, I want to pet the cow!"  It was as if everything came full circle.  Hopefully, the circle stops here and she wont be back years from now to go head to head with the cows.