I did it.   I actually shut down my personal Facebook page.

So, here's what happened...

On January 6th, 2021, I was scrolling through my Facebook feed and I began to have a physiological response to what I was seeing.  No joke.  My heart started pounding and it was a struggle to take a deep breath.  As many of you know, I've had an anxiety disorder for 20+ years now, so my first thought was Holy shit, Facebook is giving me an anxiety attack.

Then I remembered that I'm 48 years old and thought Holy F*ck! Am I having a God damned heart attack from mother f*cking Facebook!!!

Let me tell you, when you put all of those words together and consider that they could be a real possibility, you decide real quick that it's time to go.  Sayonara.  Hasta la vista.  Later taters.  I'm packing my toys and gettin' the eff outta here!

But let's not fool ourselves here.  Once my pulse returned to its normal resting rate, and I had a sugar-loaded snack to soothe my inner drama queen, I logged right the hell back on.

I mean, it's so easy to just press that little blue Facebook icon floating on the home screen of your phone, especially when you've been doing it for 12 years.  There are neuropathways established by this point!  I could not help myself.

And I'm fully aware that I'm a glutton for punishment, but don't you try to tell me that you haven't done the same damn thing!  You've tried to go off The Facebook and failed, too!  Fess up! 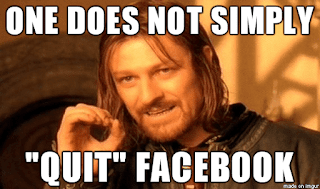 Anywho....you know what happened next?

I came to a full and final realization that I hate Facebook.  I hate it for so many reasons.  Here are just three of the skatey-eight quadrazillion reasons:

My friend Arron said to me the other day, "Facebook. Toxic place for everyone to attack each other. The playground full of bullies that never closes."  And Sweet Jesus,  it seemed like such a perfect description!

What sent me over the edge was seeing people who I care about and who I thought I knew so well posting the most racist and misogynist things.  Memes mocking people who looked, behaved, and/or believed in things that were different from them.  Photos with comments underneath, outing themselves for being something other than who I thought they were.  People with no political background spewing hate and ignorance, while miseducating others.  People who claimed to be part of a peace and love lifestyle screaming out disruption and hate!!!

Let me say this as exactly as I felt it at that exact moment.  WHAT. THE FUCK. IS WRONG. WITH. PEOPLE????  What was wrong with me????  How could I love people who felt so strongly in a way so oppositional to the core of who I am????

A whole group of people who bashed women and people of color... and **I** call them friends and/or family????

Grandma Lousie was right.  I don't need to know so much about other people's lives.  So, I'm done.  I'm done knowing and I'm done loving them.

(this one is especially for my fellow Stern fans)

NOW, on the flip side of this, I have to tell you that leaving was not all easy-peasy-lemon-squeezy.   My main struggle was where in the hell to go to get advice.  I had no idea how often I went to Facebook groups to ask for guidance on stuff.

Where can I find a good local gastroenterologist?

Which cordless Dyson stick vac is the best?

Anyone know what that email about snow days is all about?

How are the roads in town during the snowstorm?

Do these riding pants make me look fat?

Does anyone have a defibrillator I can borrow so I can maintain my social media connection and not DIE?

At least once a day I think of something I would normally dash on over to a Facebook group and ask questions about.  It's been over a month.  Google can't answer these kinda questions for me.  The struggle is real.

But the rewards outweigh the losses.  I have so much more time.  I'm a lot less angry.  I am not subjected to personal views that make me have chest pains.  And I also don't have to stay in touch with people who I now know I don't vibe with.

I talk to my husband a lot more too!  Mind you, he may not see this as a reward.

I also don't have "drama queen snack time" to soothe my sensitivities and boost my serotonin.  Extra bonus right there.  I lost four pounds just by eliminating my personal Facebook page.  True story.

Wishing you all love and many blessings, 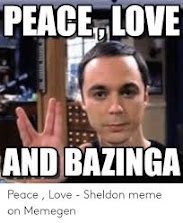