This will be round number four since September.  Allie is STILL sick since October 4th.  And Justin just sort of floats in and out of sickness as we go (the benefit of being somewhat of a germaphobe.)

I figured out what's going on though.  I really don't give a rat's ass WHAT this cold is about.  What I wanted to know was WHY we keep getting sick.  And I've come to the conclusion that this is like bootcamp for new parents.  It's the minor leagues.  When we get to the Major League (Kindergarten) we will be prepared and invincible!

Maybe not invincible, but we will be dodging bad (germ) pitches left and right!  I'm a rookie in the world of educational sickness.

I'm in complete awe of Allie's teachers.  I have three very good reasons why.

First of all, they are totally impervious to all of the germy bodily fluids that fly around that classroom.  I asked one of them the other day how she manages to not catch a cold, and she said that her immune system is really strong after being subjected to colds for so many years as a teacher.

(Side note: and how STRONG it is!  She recently told me a hilarious story about when a kid sneezed right in her face and her mouth was open.  Instinctively she reached for Purell and wiped her tongue with it without thinking.)

The second reason why I love Allie's teachers is that they tolerate my wacky husband (they actually find him endearing, thank God!), who until recently was staying for the first 15-20 minutes of Allie's 2.5 hour class to make sure she was comfortable with him leaving her there.

There was always some reason.  "She started to cry when I went to leave."  "She begged me to stay."  "She's not feeling well so I wanted to make sure she would be okay before I left."  Complete helicopter parent.

Now you see where the title of my blog came from.  HE is assuming the traditional "mom role" and I'm trying to work out my mom role somewhere on the flip side.

Finally, after talking with the teachers (did I mention that I love them?) about this, I finally had a little chat with him.  "It's been four months.  You need to just go.  Do you see any other parents there for the first fifteen minutes of class?"

"Sometimes I do!  And sometimes there are other parents there, too! You're not there.  You don't know."  Um.....sure.

I could see where this was going.  I had to bring in testimony from an expert witness.  "Well, I talked to Mrs. J (one of the teachers) and she thinks that Allie will be just fine if you drop her off and go.  Remember the first day how they told us that she would stop crying by the time we reached the end of the driveway?"

"They told me that they are fine with me being there!"

"Yes, dear.  That's what they say to your face.  Behind your back they are thinking maybe you should get the hell out of there before I have to pay a second tuition for your forty year old ass."

The truth is that they really don't care.  But they have also told me that they think it would be fine for him to leave far earlier than he does.  I also know that he's sweet and polite and entertaining....and they know that it's really HIM who has a hard time letting go.  Not her.

Now he drops her off, says goodbye and leaves.  He's moving out of Rookie status in the "cut the umbilical cord" department.

The third reason why I love Allie's pre-school teachers is this: 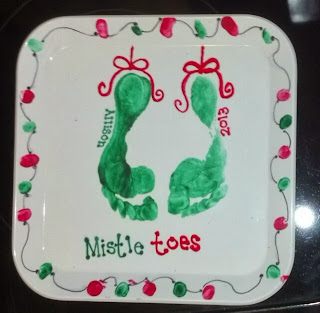 This is what Allie gave us for Christmas.  I started crying as soon as I opened it up.  Her little footprints and toe prints put together in such adorable fashion.  I never expected something so creative!  She also brought home cookies that they baked that day, but as you can imagine they are long gone.  Very tasty though!

As soon as I started crying, Allie started checking me out.  She figured out that it was a happy cry and she got all maternal on me, she hugged me and told me it was going to be okay and that she loved me.  My heart felt like it was the size of Alaska, full of love!

I hope you all are having a wonderful holiday season!