I apologize for my absenteeism the past week or so.  I had a bit of the "out and downs".

No, not the down and outs.  I went out and ended up down.  On the ground.  Twice in 48 hours.  I got my ass kicked by two 100+ pound dogs during leisurely walks around their neighborhoods.

I am woman, hear me fall! (On the upside, Operation Fattypants has left me with 18.8 fewer pounds to hit the ground.)

The first dog was an enormous one year old black lab who thinks every living being should be greeted with Marmaduke-like enthusiasm.
Unfortunately, if you're at the other end of the leash and not holding onto a tree when it happens, you will become very well acquainted with the surrounding grass and/or shrubberies.

I feel like I'm freakishly strong, but some things are just BV (Beyond Vic).  When he saw another puppy, he took off.  And I went flying as I stumbled, tripped on the sidewalk, and did a face plant into the grass.  I was a human kite. Very attractive and professional.

The second mishap happened two days later.  I was walking a large and sturdy Swiss Mountain dog when a potential customer approached me with her two dogs.  He lunged, pain shot thru my right side and off he went, as I caught myself on a conveniently placed holly (ouch!) bush.

The only thing I could say to the woman was a deadpan, "Wow.  That must make you feel REALLY confident about my abilities, huh?"  Fortunately this dog has done this to his owner, so if only one of my 20 visits was a fail, I guess I looked pretty good. She hired me.

Needless to say, my body was killing me.  And I discovered that if I lost use of my right arm, I'm entirely unprepared to start using the left.  My mom asked if there was anything she could do to help and my answer was, "Sure.  Could you come over around 730am and shampoo the right side of my head?"  Try brushing your teeth with your other hand.  It's like you've never brushed teeth before. 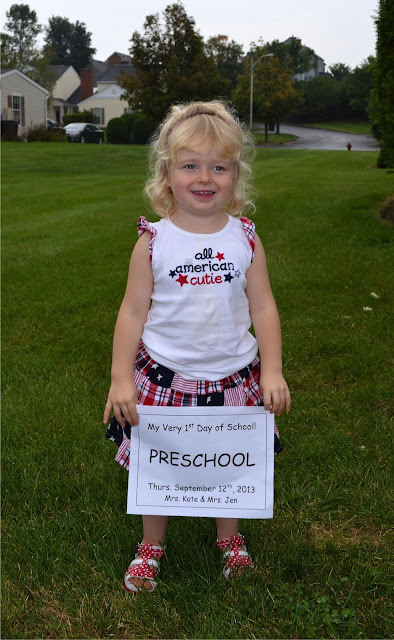 No one had to take me to the loony bin.  I thought for sure that Justin was going to be a mess, but it was me, not him, who started crying when we got in the car.  It felt like just the other day that I was getting to know this tiny, new being in the hospital.  Suddenly, she talks, walks, and bosses us around, and we are leaving her with strangers for 2.5 hours twice a week.  How in the hell did THAT happen???
At the open house, I joked with the teachers to not be afraid if they see Justin lurking in the woods with camouflage and surveillance equipment.  He warned them not to worry about the string that would be running from her ankle and out the door, because he would be on the other end and just wasn't ready to cut the cord.

She did very well when we finally left and I kept hearing your words of advice (extra thank you to Madeleine M.!).  The teachers said she was just fine and asked once where we were.  When she told Allie that we went to the store to get something, she suspiciously asked, "They aren't outside without me are they?!"  Leave it her to be worried that she might be missing out while we were playing with all of the awesome toys outside.
Allie has wonderful teachers who are truly lovely people.  I'm so excited for her!  I'm also sad for us.  She has officially taken her first major step toward independence and education and a social life of her own.  I really hope I am able to help her navigate all of this well.

You all should hope that I don't have any of your phone numbers because I foresee me making desperate calls saying, "You'll never believe what she just did!  What in hell am I supposed to do NOW???"

By the way, Happy 50th Blog Post!  I can't believe that no one hacked and cancelled my blog account 49 posts ago.  Yous guys/Y'all/Younz keep letting me ramble on, which still amazes me.  Thanks for sticking around, even if you just got here!