Just what every person wants to hear.  The area where the most change has occurred is in your face.  Fabulous.

I was really hoping it would be my giant ass or tree trunk legs that would be the first place affected.  Even better, if I didn't have to suck in my gut and still feel a fat roll, I'd be thrilled!  But noooooooo.  My face looks thinner.

I even would've been happy if my boobs looked smaller.  They've been a huge pain in the ass since I was a teenager.  Wearing the "grandma bras and sex killer lingerie" is the pits.  (A woman at a department store actually referred to my purchases as being "grandma-ish sex killers" once.  Never went back there.)  By 41, I've just given up.  It takes me back to the sensible shoes thing.....sometimes comfort is worth sacrificing style.

Operation Fattypants is still going.  You thought I would've crapped out by now, didn't you?  The coconut cake and chocolate chip cookies still call, but I send them straight to voice mail.   Sorry, no time for you!

I'm ten pounds down and still shrinking.   Slooooooooowwwly.  But I can feel a difference already.  Who would've thought ten pounds would make a difference (other than in my face...oy!)?

Yesterday I was lamenting the fact that all of my skorts were falling off when I wear them.  Then what little is left of the "cool person I thought I was" many years ago clicked in and said, 'Maybe that's a sign that thin people don't need to resort to the skort, Vic.  Is the skort still in style???  I haven't seen people wear them...um...anywhere lately.  I wonder why that is??"

My inner cool person is a sarcastic bitch.

Speaking of bitches.... last night we were watching "Big Brother" on CBS and we are always shocked by  how even more horrible these human beings become week after week.  It gives me a smidgen of anxiety.  What a surprise.  Me and anxiety.  Who woulda guessed?!

Before I go on, yes, I watch cheesy reality shows.  My DVR is stockpiling them for me.  Andy Cohen is my DVR's pimp. He makes a new show and I find myself up at 1am, with toothpicks holding my eye lids open, glued to the TV. All of those Housewives and the Millionaire realtors are hanging out patiently, waiting to rot my mind, late at night after Allie is asleep.

But Big Brother is by far the worst of them.  I'm not proud.  Loyal, but not proud.

I've watching since the inception of BB and I go back for more year after year.  Big Brother After Dark kept me entertained during the insomnia phase of pregnancy, so I kinda owe them.  (That's my pathetic excuse of the moment right there)

This year the women are embarrassing.  Three are racists who think their comments (which are heard live by millions of people) are "no big deal".  Another one has tried to start a romance with four men, desperately trying one after the other until one of them took the bait.  (He has since dumped her and moved on to one of the racists.)  One is a master manipulator who uses her skills in politics to shmooze everyone and fool them into thinking she is on their side.  And one is a complete bully, whose mission is to force her housemates into doing what she wants, or she scares the shit out of them.

Not one of these women could be a role model for Allie.  They are dreadful.

And yet, there are two who I find endearing.  One is a highly sensitive yoga instructor who is a terrible  liar, a devoted friend, and everyone thinks she's a dope.  The other one is an attractive, intelligent african american girl who is antagonized by racist comments and tries desperately to stand up for herself, which everyone in the house finds to be annoying.

Out of this collection of women, the only people I would want Allie to learn anything from are The Dumbass and The Annoying One.  That's what the others have pretty much labeled the people with scruples.  How lovely.

Before having Allie, Justin and I used to have conversations about having children and often the same statement came out: Do we want to bring a child into a world full of so much hate?  My only response was, 'If the good people start dwindling, who will stop the others from taking over?"

So, in turn, I have now declared my Big Brother viewing to be research.  R&D.  Research and Development to prepare myself for what kind of people are out there waiting to corrupt my little princess after we have worked so hard at teaching her to be a kind, loving little soul.

We need to prepare her to fight the meaniepants bitches from "taking over".  Fight the good fight!  Speak out against the injustices of the world!  Have a cape and a mask!  Wear gold bracelets that deflect bullets!   Make friends with the Wonder Twins so you can report back to me how they actually activate their powers!  Rule Gotham dammit!!!  (I took it too far)

How about if she just hangs out with Shaggy and Scooby (ruh-ro!), and makes friends with the girls that the evil ones have labeled as dumbasses and annoying?  They may very well be misrepresented.   Someone should find out for sure.

In the meantime, she can help house train Scrappy until they get it all figured out. 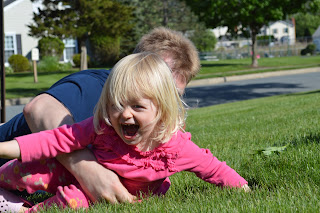