Giggles From God - Part 1 (don't let the title scare you!)

Justin, Allie and I were sitting on the couch watching the BubbleGuppies when the theme song came on.  We are the kind of freaks that bust a move when those catchy little tunes play, especially since Allie gets super  excited when we do.  She was sitting on the footrest part of the recliner when she threw her arms up, started wiggling her tushy and began singing, "Bub-Bub-Bub, Bub-Bubble-GUP...."

And then she was gone.

Shimmied her shit right off of the recliner.

She literally fell backward off onto the floor.  And I lost it.  I'm losing it now just reliving the moment in my head.  It was hilarious.

Immediately, Justin helped her up and she started to cry.  I knew she wasn't hurt, but the sudden fall scared her.  She climbed into this lap and sobbed, the poor thing.

I was sitting next to them, about 2 feet between us, rubbing her back and tears were just flowing down my face.  Stifling the laughter was so painful that I was actually crying. I couldn't even speak for fear that if I opened my mouth what might come out would be, "Ba! Hahahahahahahaha!"  What kind of mother laughs at her child like that?

Allie saw me and I know what she was thinking.  'Oh, Mommy is crying too!  She must be upset too!"  So she moved over to me for hugs and to comfort each other.

At some point she must've sensed that I was crying because I was laughing, not feeling sad.  She pulled her head back to look at me and got this very suspicious look on her face.  Then she crawled back over to her father.

And that's when I got the glare and head shake for poor parental behavior.  Mind you, once I was able to pull myself together and act like a mature adult, I was able to console her.  But I still felt like a bad parent while trying to stifle myself.

My point for telling you about this demented story is not to debate my parenting skills but to touch on something near and dear to my heart:  giggle-worthy gifts from God.

When something hilariously embarrassing, ridiculous, klutzy or brain-farty happens and you get to see it, I consider that "a little gift from God".  The one criteria is that no one gets hurt.  If someone sustains an injury beyond a minor contusion, all bets are off.  Then it's not a gift and I'm sure God does not want to be tied into it as something he did for your personal amusement.

(I really think I'm something speaking on behalf of God, don't I?  I'm merely speculating, people.)

I have a slew of these episodes in my past that I refer to when I need an silly story to tell or just want to amuse myself.  I will be sharing some of these with you over the next few blog entries, no holds barred.  I have plenty of moments of stupidity that a more sane person might find mortifying and want to keep under wraps.  Not me.  If you can be entertained by it, then it should be shared.  I wish you all could've been there to see it happen to me.  And I encourage you to contribute yours with others as well, should you be as much of a nutjob as I am.

There are two types of this genre of "gifts from God":  The First Hand Experience Gifts and The Observer Gifts.  I'm going to start with one of The Observer Gifts this evening.  It's a personal favorite and most definitely one of the top 5 in its category in my world.

Many, many moons ago, I was married to another man who shall be referred to as Al.  (I let him pick his own pseudonym and he came back with Al Hearst.  I have no idea why.  Maybe it's an inside joke that someone who is reading this will find funny.)  Al was a little older than me, very Italian, just as crazy as I am but with street smarts, and he had a very good job in the entertainment field.  Every day he took a bus to and from NYC.

Al hated this job.  On the days I drove him to his job (because not even busses ran that freakin' early in the damn morning....thanks, Dick!), he spent the entire time cursing his boss and the roads and his boss and people in general and his boss and the hours and pretty much everything that deserved (and did not deserve) to be bitched about.

By the time we got to Manhattan, I was so stressed from his misery that I wanted to throw myself into oncoming traffic.  Had I not driven the 35 minutes in my jammies, I might have considered it, but who wants to have their jammies be the ensemble they are wearing when an ambulance comes to scrape them up off of the side of the West Side Highway?

Al would work 17 hours and take a bus home.  Once he got dropped off in our town he would call me and I would go pick him up.  Here's where the funny part kicks in.

I guess it took me longer than usual to get ready because Al decided to start walking home.  I could see him walking slowly toward me, tired, wearing a heavy leather coat, carrying a big duffel bag and smoking a cigarette.  He saw me too and stopped walking.

What he failed to realize was that he stopped walking right in front of a pole with a firehouse siren on it.  Have you ever been "kinda near" one of those when they go off?  It's deafening.  People can't hear you talking even if you're screaming directly in their ear.  After all, it's meant to be heard by people miles away from it.

So, I'm beginning to slow down and suddenly,

The siren goes off.

So loud, I even jumped inside of my car and I was probably still a block away.

He fucking full-fledged freaked.  Freaked.  There's just no other way to put it.

It was like he got hit with a taser. Cigarette went soaring, duffle bag went flying, his eyes were like saucers, arms and legs went flying in different directions..... it looked a bit like this but in male form: 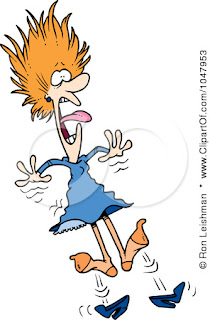 I laughed my ass off.  I laughed so hard that I stopped driving and drifted right into a mailbox.  I couldn't see through the tears.  It was one of those laughs where you seize up and you can't breathe in or out, you're just stuck in a moment of full-on hysteria.

The fact that I got to see it was clearly a gift from God.  It had been a crappy day and God knew I needed a chuckle.  He went above and beyond the call of duty to provide that chuckle that day.  He managed to place Al at the perfect place at the most opportune time to make it all happen.  He even made sure I moseyed along while getting ready to leave.  No sense of urgency that night!

Al grabbed his stuff and practically ran to the car.  When he got in, he was WIDE AWAKE.  He probably could've worked another 17 hour shift after that.

He was breathing heavily, his eyes were bulging out of his face and right away, his first words were, "J*sus Ch*st!  Did you HEAR that??"

That just sent me into a whole new round of laughter.  Did I hear it?!!  People in Guatamala probably heard it!  But none of them got to SEE it like I did.