Where did this past week go?  It's like a big blur to me.  I know stuff happened, but I can't remember much beyond talking to furry beings for a good part of my day.  Oh, wait!  I do recall some nice weather.  Thank you Mother Nature for showing some mercy.

Operation Fattypants is still in effect.  Eight pounds gone.  I'd say "lost" but I'm not planning on looking for them.  This isn't a cat.  8lbs have vacated the premises and no one is in hot pursuit.  No one is going to be putting a photo of those 8lbs on the side of a milk carton with MISSING and REWARD IF FOUND printed near them.  (Do they even do that "missing persons on a milk carton" thing anymore?)

For the first time since I was pregnant, I got on the scale and the second number has changed to a rarely seen digit.  Prior to that, I hadn't seen that number since 1997.  A whole other century ago!  Way way back in the olden days.

Now, some of you might be scratching your heads.  That last paragraph was confusing in regards to the timeline.  I can explain.

26 years ago I weighed ABC.  After that, I "blossomed" up to ADC.  There was this whole Every Diet Known To Man experiment that I had going on for about 23 years where.... um... nothing happened.  Stationary/static fatness.

Then I got pregnant.

I was determined that I was not going to be a woman who had a baby, gained 80lbs, and then spent the next 10 years blaming pregnancy and birth for being a chubster.  The doctor gave me one speech about weight.  ONE.  He said, "This is not an excuse to eat everything under the sun.  You're eating for one pregnant woman.  NOT two people.  One. pregnant. woman.  I'm not going to mention your weight to you again unless there's a problem.  If I don't say anything, consider yourself within healthy limits."  That was all I needed to hear.

This is where my occupation began working with me physically.  (It took long enough!)  I was walking all day while carrying this little package I couldn't put down.  To boot, this additional human being was sucking up 500 of my calories by just existing.

I gained twenty-one pounds.  For the first time in my life, my doctor was telling me that I was the poster child for healthy weight.  With a BMI of seven trillion for the past two decades, I sucked up every one of those pats on the back and beamed like a beacon.  I was so damn proud of myself.

Allie was born and a month later I got on that scale and saw a number I hadn't seen since I was twenty-five!  What followed was what any other woman in disbelief would do after weighing herself.

I got off of the scale, shook it, put it back on the floor and got on it again.  Same number.

I took the scale into another room, stood on it and stared at the number.  Then I stepped off, flipped the scale over, took the batteries out to reset it, and tried weighing myself again.  Hot damn!  Could it be?

It was a joyous moment!

Why?  I have no idea!  If I knew why it didn't last, you would be reading my New York Times Best Seller book on weight loss right now instead of my One-in-a-sea-of-a-kajillion-blogs ramblings.

I can confirm that eating was involved.  That definitely contributed to the weight gain.  (Imagine that.)  I just don't know what happened between the joyous scale moment and me stuffing my face with reckless abandon.  Whatever occurred was a trigger to make me go from happy to porky ASAP.  That trigger is my enemy.  It does not want me to be healthy.

But my Little Peanut does.

Considering that one of the driving forces behind creating and implementing Operation Fattypants has been Allie, as well as the fact that she also helped me achieve this weight three years ago, I have come to the conclusion that babies contribute to weight loss.  Yup.... babies equal weight loss.

Can you imagine trying to prove that crazy theory?  REAL scientific conclusions get destroyed all of the time, and those ones actually have diagnostic information and endless experiments to back them up.  I'm just taking a shot in the dark with this one.  It's my own personal theory.  I'm nuts, so it's only fitting that my theory is as bonkers as I am.

Before I wrap this up, I wanted to share two photos.  After wondering what in the hell I actually did last week, I picked up my phone and tried to find some evidence.  Here's what I came up with.... 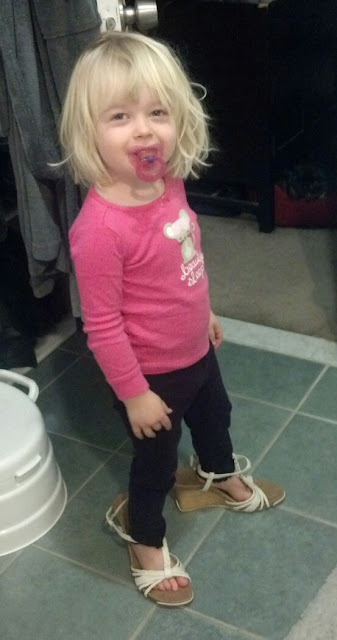 Apparently my love of shoes has been passed down to the next generation.  I wasn't paying attention to what was going on behind me while getting ready one morning.  Suddenly, I hear "Mummm! Rook!" (that's what Mom, look! sounds like with that stupid binky in her mouth) I turned around and there was Allie wearing a pair of my strappy cork-wedge sandals.  She took two beautifully graceful steps..... and then face planted into the wall.  But those two steps were clearly indicative of someone with a natural love for cute, yet uncomfortable foot apparel!  I AM PROUD. 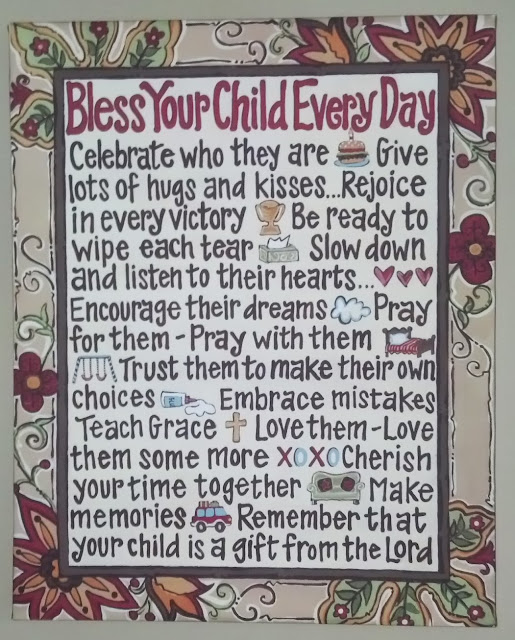 Last but not least, I found this (above) hanging on the wall at a customer's house this weekend.  It stopped me in my tracks.  I took a moment to read it and think about it.  As I walked down the stairs, I thought, 'What a great world it would be if things like that were hung in random places all over the place.'  We would walk around corners and find words of wisdom about all sorts of things.

The question is, would we stop to read them?  Probably not here in New York.  Someone would steal 'em.