Happy Independence Day, everyone!  It's July 4th and everywhere I turn there are pool parties, barbecues and bevericues (parties with hosts who love to get shnockered and hate to ruin a good drunken stupor by providing food for their guests' stomachs).

I wonder if our forefathers did the same thing each year.  Did they celebrate their freedom from the laws of another country by hanging out near the closest swimming hole (did rich people have some kind of swimming structure back then?), tossing back a few mugs of moonshine and torching up a bonfire to cook some sort of burger (venison?) and corn for everyone to eat?

That last question made me realize that I did not pay enough attention in history class because I have no clue what colonial life was like beyond covered wagons and corsets.  I know they had corn though because there was that whole thing with the Native Americans teaching them about maize and stuff before the greedier settlers stole the land and murdered some of them.

This marks the end of my fifth year with no holidays.  Whoo hoo!  Next month I start my sixth year of business and I think I might be a rebel and actually take some holidays off.  Holidays are business booming events for people like me, but I really do miss having Thanksgiving dinner without thinking "I should've blocked off more than three hours to driver here, celebrate, eat and get back to work out there."

Last winter I officially became disgruntled when my daughter had to wait until I got home at 11am to open her Christmas gifts.  That's when I stomped my foot (after I cried like a big baby) and said, "NO MORE!"  I'm missing events that I can never relive.... because I'm working?

I'm not looking for a pity party here, so you can put your tiny little violins back in their cases. For the previous four years I really didn't mind working on holidays at all.  But once Allie started to participate in them, I loathed going to work on those days.  Suddenly things aren't as "routine" as they used to be.  I get to see the magic in the holidays all over again.  Before Allie, the magic was a little more "rabbit in a hat" and less "saw the lady in half and see her move around while her top half was away from her bottom half."

However, this Independence Day I was a-OK with working.

Why, you ask?  (just pretend that you asked)

Because I live in a town where they "celebrate" July 4th on the Saturday BEFORE the holiday.  My town doesn't let the rest of the United States boss it around!  It celebrates when it's convenient and it's damn well ready to get its independence on!  Back off USA.

Seriously, we have our little celebration the Saturday prior to the actual holiday. The whole week before that, the firemen have a carnival and then on that Saturday they give us a lovely fireworks display to conclude the week long celebration.

Why they don't do it the same week of the 4th, I cannot say.  These are the people who will save my family and pets while putting out a fire if it happens in my house, so they can do whatever they want on whatever day they want and I will be very compliant and cheerful about it.

My home is a 5 minute walk from the park where they have the carnival and fireworks display, which works out quite nicely. Every year  I make Justin drag lawn chairs out on the lawn by our patio, light citronella candles, grab a drink and we plop our asses down to enjoy the show.  My parents live across the street and usually come over to watch with us, too.

This year we waited on the damn lawn for about a half hour until the firemen decided that there was an appropriate amount of darkness to bust out their lighters and get things going.  About 5 minutes before that, my mother looked at us and asked the question that you frequently ask and/or hear when you have a two year old.  "Did she poop?  I smell something."

How appropriate!  Perfect timing to push out a pooper!  I'll chalk it up to the excitement of anticipation.

I leaned over and took a whiff and said, "No.  I don't smell anything.  Allie, did you poop?"

"No," she answered, straight faced lying to me.  And I was feeling lazy so I believed a two year old over my mother who has the sniffer of a bloodhound.

This is a conversation I never imagined having on an every day basis before I had kids.  It just wasn't something I considered when the topic of having children popped in my head.  "I'd like to have kids someday.  I wonder how much time I'll spend discussing poop when that happens?"

The answer to that question is A FREAKIN' LOT.  Anyway....

About 2 minutes before the show began, the smell hit me like a ton of bricks.  Allie was sitting right next to me and you would've thought she was standing on the chair with her butt pushed up against my head.  Yowzers.

There was no denying that someone had pooped and that person was 3 feet tall and insisting that she had a clean diaper.   Knowing that time was limited, I jumped up and whisked her out of the seat and ran for the house, with her yelling, "Mommy where we going???  Why you running inside????"

I think I freaked her out by moving so briskly.  She thought she was in trouble and was on the verge of tears.  But I had a mission.  Shoes off.  Pants down. One diaper tape ripped off.

I have never changed a diaper so fast in my life.  Even Sadie, who is terrified of fireworks and was hiding in the bathroom with her head behind the toilet, peeked out to see what the commotion was all about.  Diaper off, wipe, new diaper, fasten tape, pants on, shoes on, whip child up in my arms, run back through house, toss diaper into garbage with NBA-like precision as I pass by, out the door without smacking into the screen, thru the patio, to the lawn chairs, plop her on Mom's lap... and then I sat down, gasping and panting.  Cuz fireworks are big doin's, you know!
The best part of it was that Allie spent over half of the time that the fireworks were going on telling my mother, "I almost missed fireworks cuz I pooped!  I almost missed it!"  She announced this about every ten seconds, very loudly.  Loud enough that my neighbors could hear it over and over again too...and then tell me about it the next day.  Yay.


Justin and I spent the second half of the show cracking ourselves up with our weirdo imaginations.  People used to tell me that I "see in cartoon" and I kind of think there's some truth in that.  I take situations and imagine funny outcomes.  One of the reasons why I married Justin is that he can take those dreamed up outcomes and run like a mudder flucker with it.

This particular situation was a pause in fireworks.

Justin: "So, what are we waiting for."

Pause as I start seeing in cartoon and begin giggling.

Me: "What's happening is that there are two guys back there fighting over who is going to light the next one cuz they both think it's their turn."

Me: "I was just thinking that if that was you and me we'd be back there yelling at each other and blowing each other's flame out:

(for the record, that would be me starting the fight and then finishing it by calling him a bitch)

Justin: "And then we start pushing each other, throw down the lighters, drop to the ground and start beating the crap out of each other."

Me: "MMA fighting on the lawn at the park."

Justin: "Rolling down the hill into the crowd."

Allie, from two chairs away: "I almost missed the fireworks cuz I pooped!"

We giggle.  The fireworks start up again.

On that happy note, I will leave you with a photo from earlier that day.  This is one of my favorites.  Allie loves her "little Sadie"stuffed animal, and when we let Sadie near it, she gently cleans it like it's her puppy.  It's adorable. 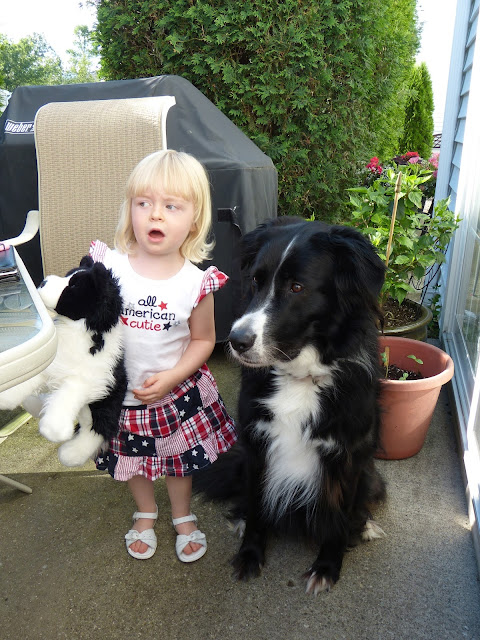 We were on the pack porch when our neighbor lit a bottle rocket. I'm surprised there wasn't a Sadie-shaped hole in the screen door right after this.  Two minutes later, however, Sadie could be found in the bathroom trying to fit behind the toilet.  She's 80 pounds.  Our toilet isn't that big.

I hope you all had a fun-filled, safe 4th of July!


(A little something for those of you who didn't know how old our country was....it's okay....THESE people were WAY OFF *click here*.  Feel better now?)