It was a gazillion degrees out there.  I think God was having a little fun with me by matching the temperatures to my nom de la semaine (name of the week).

(That one year of French in high school paid off right there, didn't it?)

And The Big Guy Upstairs didn't let up.  Oh no.  The boiling temps hung around right up until my work schedule let up on Sunday afternoon.   Suddenly, it was positively delightful at 80 degrees with clouds and breezes.

I managed to stick with my little dietary change through it all..... despite the ice cream place at the top of the mountain calling my name every time I drove past..... which happened to be six times each day.  Six times of me yelling "I DON'T WANT ICE CREAM SO PLEASE STOP!" at the top of my lungs to nobody.

Unfortunately, I had a tiny taste of heat stroke due to a drop in blood sugar on two separate occasions (because I like to make sure that I learn my lessons well by repeating them until I'm 100% that I've f*cked up).  The weather people stressed high water consumption, but failed to mention that eating enough food was a skoatch important as well.  Things got yucky.  Dizziness, nausea, headache, etc.

One afternoon I couldn't remember an entire hour spent outside.  It was as if i had been asleep the whole time.  I was completely freaked out.  I was in the middle of filing a phone claim (because that's what you should do when all of your faculties aren't workin' up to par) when I realized I was speaking English, but wasn't making sense.  I remember the fella saying, "Ohhhh!  Now I get it!" about 10 minutes into the call. ( I gave him a big fat Excellent rating in the survey at the end of our call.  He earned it.)
So, despite my little food faux pas, I walked over 75,000 steps, almost 38 miles, and lost 5lbs.  Operation Fattypants is still in effect.  Slow but steady wins the race, right?

Every time I look across the street I'm so grateful for the pool.  Even the kiddie pool that's heated by baby piddle.  A few days last week, we found time to schlep on over to cool our stuff off and let Allie splash around.  I love watching her with her little floaty thing on,  swimming around all willy nilly with no purpose or direction..... just like a baby duck. 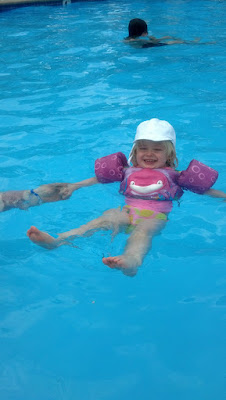 The other day we had a genetic A-HA! moment at the pool.  The photo below was taken right after we had that.
Let me preface this by saying that my mother should've been a private detective.  She would tell you that it's her ADD, but I think that her observation skills have been honed partially by her love of people watching, her natural curiosity about the unknown, and then maybe a little ADD mixed in with a sprinkle of OCD.

If a stranger drives past our area, conversation ceases, she'll get a kinda squinty, snap into PI mode and start with the questions.  Observational questions.  Many questions.  There's no distracting her.

"Who is that?  Do you know that person?  I've never seen them before.  Which way are they going?  Is that a friend of (insert neighbor name here)? They were going pretty fast, don't you think?"

We tease her about it, but I do find it endearing.  Not to mention that we shouldn't mock her considering this skill could be quite beneficial should there be a crime within 300 feet of my mother's existence.  She will be watching, getting the deets, and writing them down in a little notebook somewhere for the police to refer to.

Back to the story.

We were in the pool and the lifeguard got up and started doing his thing and then BAM!  The P.I. genetics kicked in.   For some reason, she was very suspicious about the life guard and every single one of his actions.  Allie got all squinty-eyed, honed in on the poor guy and, suddenly, she was my mother.

"What he doing?"  (he was putting away discarded pool noodles)

"Because that's his job."

"Why he doing THAT?" (now he was moving an umbrella)

"Because it's hot and he should be in the shade."

She just dead on stared at him.  He sat back in his chair looking everywhere but at her.  He knew she was watching.  You could see that he found it amusing... and creepy at the same time.

"Now what he doing?"  (he was getting the net to skim the baby pool)

"He's getting a net to get bugs out of the pool."

"Why are there bugs in the pool?"  (I feel my chest tightening)

"What is he checking that white thing for?"  (the cover to the filter)

"To see what's in the filter."

"**I** want to see what's in the filter!"  (starts splashing toward the stairs)

This behavior continued the entire time we were at the pool.  We always thank the life guard on duty when we leave, and as we approached him, we told Allie to say thank you.  She held my hand and walked by, never losing eye contact, mumbling "Thank you" quietly.  I was waiting to see her do the two fingered gesture that says, "I'm watching you. These eyes are watching you."
If anyone is looking for someone to do surveillance or back ground checks on people in about 16 years, please give me a call.  I imagine my daughter will be highly skilled in this area by then.  Until then, if you live in my neighborhood, between my mom and Allie, you should sleep well at night.  Things are under control.  You're safe.  (wink)