It feels like there is no recovery time in global tragedy occurrences anymore. Im not sure whether that is an accurate observation or not. It feels that way to me. Maybe the media and technology have really created the lack of lull. Im not totally convinced of that though either.  It could be me.  Maybe Im too sensitive.  Current Events Sensitive?  Newsly Challenged?  Every little quirk has a title these days so we feel less nutty and more like we have a problem so real that it had to be named.

Looking back a to 9/11, it felt like that horrible moment happened and then we were allowed time to heal, or at least try to. As I've mentioned before,  there was no shortage of media coverage after the United States was attacked. If they ran out of things to cover here, they went abroad to investigate what other countries thought about our situation, or what the terrorists were all about and what fed their hatred of us. But it still felt like we had time to process what had happened.

Over a decade later we have non stop tragedy, complete with "filler". There was the Sandy Hook School shootings, followed by the Boston Marathon bombing, and then the mass destruction of the tornado in Moore Oklahoma. In between, we had Jody Arias' sick and twisted love affair/murder trial, the rescue of the three girls who were kidnapped ten years ago in Cleveland, random women being raped on mass transit in India, our President receiving mail with hazardous chemicals, banks crashing in Cyprus, the ongoing battle about gun control and, most recently, the train wreck called Amanda Bynes, which is sad for her and pathetically desperate of the media. (That last one was added just to see if you were paying attention.....there will be a quiz on this later which will account for 25% of your grade)

When do we get a break?

My mother, husband and I don't watch the news. I catch up on the news that I can handle by reading it on line. I know that this is the right thing for me. It was confirmed months ago when I sat down with my step father and the news was on tv. After watching for literally fifteen seconds, I was haunted for weeks by the visual of how Syrian children were being used as weapons during the country's current conflict.

I know we all need to be aware of whats going on around us. We all have the right to however much information we want or dont want. But when is it considered too much? Do we risk desensitizing ourselves? Are we making ourselves more anxious and neurotic by having all of this information? Is this awareness instilling more fears?

Fear can be paralyzing. I know because deep down, after hearing all of this, I want to live in my own little bubble with my family. I want Allie to be with us all of the time so I can protect her. My greatest fear is for something to happen to her where our precious life with her will be forever changed. Im afraid that she will be hurt, or get sick or worse. Some things, like certain illnesses, you can't protect anyone from. But there are those other things that you always hear "if only I had ___________, he'd still be alive." Preventative measures that went undiscovered until it was too late. I just want to hold her and hug her and keep her near me always. I want to keep the hatred, destruction and death out.  The media seems to keep all of it on our doorstep.

But I know that bubble is not possible. Well, actually it IS possible but completely unhealthy. And a bit weird. Everyone has had neighbors at some point in their life where they said, "We never see those people. Never. I don't think they ever leave the house." I seriously can't imagine that being us with my big mouth, Justin's propensity to talk to everyone who speaks English that comes in earshot, and Allie's constant inviting of people to "Come over. Hi. Come over, please. Hello?"

With that being said, I want to end this post on a light and barely relevant topic. I feel obligated to go light and airy for some reason.

Just a little visual to give you a giggle. When we went on our honeymoon, I was sick. Like very flu-ish. There was some virus going around called "the swine flu" (f*#king fantastic name for a chubby sick girl, right?) and I guess I had it. When we landed in Aruba, my ears were clogged for about 36hours. It was probably the only time Justin has ever heard me speak in a calm, quiet tone for many consecutive hours. Why? Because I was so damn loud inside my head! I heard myself as if I was screaming everything.

Anyway, we decided to rent a car the second day and a local picked us up and gave us a crash course on what the signs meant and where things were. The minute I saw this guy jabbering away to Justin in the front seat, I panicked. Why, you ask? Justin only speaks American English (see, here's how I made this story "barely relevant" to the topic above), and when he hears an accent he hears every third word.

I, however, worked at a limo company where if you met someone who didnt have an accent, it was considered odd. I struggled A LOT but I did eventually learn how to understand people with accents. BUT, in this story, Im hearing impaired, remember? I was trying to read the driver's lips in the rear view mirror but he was throwing us around with his crazy driving.

We got out of the car, smiling, and when we finished the rental paper work and got back in to drive, I asked, "How do we get back? Which way did he say to go?"

"You don't know? How could you not ask? He was rambling the entire time. He didnt mention anything??"

Enough said. What a pair we were. He couldn't understand because of the accent and I couldn't hear squat because of the swine flu. By the last day, we were finally able to find our way around. We got trapped in many traffic circles for way too long. And we still have no idea what this means: 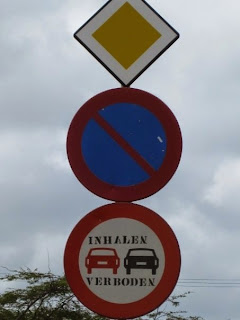