Optimism At Work and Play

I actually own rose colored glasses, and they seriously do make everything look better!  That's no cheesy cliche.  If you ever have a chance to try a pair, do so.  I bought mine as custom made prescription sunglasses, so I can't recommend any particular pair for you.  I will say that they were worth every penny and when they die, I shall spend every last bit as much to get another pair made.  The only disappointing part is that sometimes I will see something beautiful and when I take them off to look at it again, that same thing is kinda blah.  They "pretty up" your surroundings.  We ALL should own rose colored glasses.

Where am I going with this?  I am aiming for optimism.  Not just "wishing for things to turn out well in the future" but also "seeing things now in a more positive light".  It's difficult to maintain the second one, but if you incorporate a smidgen of humor you can achieve optimism at any time.  Let me give you an example: 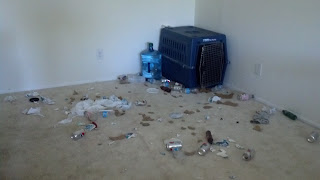 This was the sight I walked into one morning at a customer's house.   This person has a one year old puppy and the first day that he decided to leave the dog out of his crate, major damage occurred.  A blue pen was destroyed on the off white carpet, the recyclables were un-recycled (not a word) and slobberfied (another non-word), the morning coffee grinds were eaten and....the worst offense in the world of men....the remotes were chewn.

Listen, I know "chewn" is not a real word either, but Justin came up with it years ago and it just feels right when talking about things our pets destroy with their teeth.  He came to me once holding a clock radio with the cord sliced in half by our rabbit and declared, "No more! I'm gonna kill him!  Look!  It's totally chewn!" On the other hand, this happened many times and Justin now the king of wire splicing due to all of that practice fixing our electronics.  See how that optimism works??!!

Back to the doggie destruction.  That photo is only one corner of the damage.  There was a lot more.  I was tired and crabby and in no mood to deal with more work than I planned on for the day.  However, I stopped for a moment and thought about my dearly departed dog Shiminute.  He was the master of destruction.  We once had a situation so bad that we referred to the event as "The 14 Points of Shiminuian Destruction".  So many things were eaten and "processed" that we couldn't tell if it was poop or the chocolate cake he tore into that was on our walls.  That story is 15 years old and we STILL tell it.  NOW we laugh.  The only thing missing was photo documentation.

I looked around me and smiled and said, "I'm gonna take pictures of this so he will be able to have evidence when he tells this story years from now."  Optimism. I took a ton of them!  And I told my customer how he would appreciate them some day too.  I know because I have another customer whose Christmas Tree was dismantled and dragged down a flight of stairs the first time she left her dog out of the crate for a few hours.  I didn't think of taking pictures until I dragged it back up stairs and propped that half naked tree back up in the stand.  We both wish that I had thought of the camera a bit sooner that day!

So, when I hear stories about children who have been potty trained way before Allie, or who started speaking far earlier than she did, or began walking when she was still hanging out on the floor, I stop myself from comparing and feeling as if there's something wrong with either me or my child.  Instead I bust out my optimism. "Thank God she has her father all day and doesn't need to be potty trained in order to go to preschool. She can do it when she's ready."  "She'll have plenty of time to talk.  My mother still talks about being careful what I wish for because I never shut up once I started."  "Once she starts walking she's going to be all over the place so let's enjoy being able to catch her without breaking a sweat for now."


The last time I checked, the high school didn't have many 15 year olds who preferred wearing diapers, babbled only in baby language, and crawled to class.  She'll be just fine!  So fine that she runs all over the place, talks constantly (my mother warned me!) and tells us so frequently that she wants to hang out on the "big girl potty" that we are considering installing a refrigerator and recliner in both bathrooms so we don't have to sit on the floor while starving for so many hours during the day.

Speaking of which, Allie got another big girl potty from the Easter Bunny (a/k/a Grandma)  She loves it so much.  I have no idea what her obsession is with putting these things over her face.  She made BOTH of us join her in the potty celebration this time. 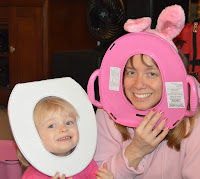 The optimistic side of this particular situation is three-fold:
1- She will NEVER put these things on her head again once her little
tiny tushy touches them for their intended purpose.  Ewww.
2- She loves the idea of using the potty so much that she wishes she could wear one.  I'm confident this idea will not continue much longer since we will NEVER let her leave our home wearing it as an accessory.
3- She loves us so much that she wants us to join her in her little potty seat jubilee.  Girlfriend loves a party!
Posted by Vicki at 12:44 AM