Pre-Dead On The Food Chain

My food cannot make eye contact prior to consumption.  I just CAN'T eat something that was alive in front of me recently.   I don’t want to see the cow enjoying a good grazing in the pasture right before it becomes a steak on my plate.  If I’m feeding the chickens at the local market, I’m definitely not having a cutlet for dinner that night.

My food needs to be pre-dead.

In other words, it needs to be dead and no longer in it’s original shape when I’m about to consume it.  Pig roast?  Not gonna happen.  Even if it’s dead when I first see it, it still looks exactly like it did when it was chillin’ in the ole sty.  Nay nay!

This weekend I saw a HILARIOUS video about a woman cooking live crabs for the first time and I definitely could relate!  In case you missed this gem, have a look:

The dog totally makes the scene for sure.  He’s all worked up and frazzled because his human is freaking and there are creepy crawly things with pinschers on the floor moving around.  Of course they cut out the part where the dog starts barking like crazy at the crab on the floor after the woman dives under the table.  The whole thing is priceless.

Just like every other time we go to the supermarket, this weekend Allie insisted that she go look at the lobsters.  It KILLS me.  I can’t go.  I make Justin go with her.  All of those poor lobsters, looking depressed with their claws bound up, and probably thinking about frolicking happily in the ocean when they were baby lobsters.  To boot, there are like 47 lobsters per square foot in those tanks.  The seafood department is heartbreaking.

(Side note: Don’t even get me started on Red Lobster.  Food should NEVER greet you at the door before it gets killed!  What kind of sadistic person thought THAT up?!  Can you imagine the anxiety they feel every time that door opens?  I always tell the lobster that I’m allergic so they relax a little)

Of course you know that I have to preface my story with SOMETHING.  Here it is.  On the way into the grocery store, Allie sees the shopping cart with the car on the front waaaaaay over yonder and asks if we can use it.  “Please, Mommy??! PLEEEEEEZE???!!”  So, I trot across the lot to fetch it, she gets in the car in the front and off we go.

We aren’t in the store more than five minutes when the lobster viewing drama starts, so she gets out and off they go to the tank.  As always, I continue shopping and wait for them to catch up with me.

Every aisle I went through had a child in a regular cart that pointed at MY cart and said, “Mommy!  There’s the cart with the car!  I told you!”  And every child and mother would look in the car, see empty space and look at me funny.  Of course, I felt the need to explain to every  last one of them that my child was back in the seafood section…. and I really don’t think anyone believed me.

I finished all of the shopping and was in the dairy section when Justin and Allie came trotting along, toting….what else….a bag with a lobster in it.  By now I’m completely stressed from feeling the need to validate why I was using the cart with the kid car on the front with no kid in it, so seeing that bag nearly freaked me out.  It must’ve shown on my face.

“Mommy!  We got a lobster!  We’re gonna take it home!  I want to put it in water!”  He’s lucky he’s got that happy little human next to him to lighten the mood.

We’ve done the lobster thing before, so Allie has seen that the lobster comes home, goes into the fridge where it’s forced to think about it’s sins and wish it was back in the supermarket where “things weren’t so bad”, ends up on a pot of water on the stove, and then Daddy eats it while making all sorts of happy noises.  So, she knows it’s going to die.

I just think that she has hope that one time we’ll fill the tub and just let it live.  Truth be told, if we lived near the ocean, I’d kidnap the poor thing, drive like OJ to the beach and set him free.  He should be food for something out there!  Not for something I live with!  The food chain is all jacked up as long as he’s in my fridge!

(Warning:  If you're sensitive to the whole Lobster thing, quickly scroll past the next few photos.  Stop when you see the lobster cartoon.) 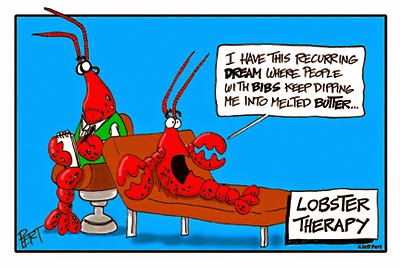 I’m so glad that I can’t eat shellfish.  This whole process just freaks me out!  I vacate the premises while he cooks them and sometimes I leave when he eats them too.  BLECH!

I discovered I was allergic when I was much younger, and then it was confirmed when I got a job in a local fancy restaurant as the “shrimp n’ salad” girl.  I was the person who prepped bread baskets, made salads and prepared shrimp cocktail.  It went something like this: Fill bread baskets, eat shrimp, make salad, eat shrimp, make shrimp cocktail, eat shrimp, eat shrimp, eat shrimp, etc.  By the end of the night, my shrimp consumption career was over.  I was sssssiickkkk.  My passport to Shellfish Island was revoked due to awful allergic reactions.
And now I know things about bread baskets that I wish I never knew!  Let’s just say that if it looks like a bunch of random bread pieces tossed in a basket, only proceed if you’re really hungry.  I won’t even get into the butter recycling situation!

Anyway, the lobster is gone to the big aquarium in the sky.  I make Justin clean everything that came in contact with the poor thing....or was near it..... or the lobster looked at.  I refuse to participate in any part of this heinous act, from purchase to dishwashing.  No lobster death on my hands!

I can't just end this on such a negative note.  I need to find something happy.  Here's one of my all time favorite videos.  It's a cat beating the crap out of a laser jet printer..... and narrated by an English bloke.  The accent always makes it funnier.