It's My Potty and I'll Try When I Want To

Potty Training is probably the only time in our lives when people cheer because we "made a peepee in the potty!"  You might see it again later in life after some strange medical procedure, but toddlerhood is pretty much it.  You go, there's a fuss, everyone is excited, and maybe a reward is involved.  It's the best!

I bought Allie a potty in August 2012.  We took it out of the box, she dropped trou, picked up reading material and sat down on the potty right in the middle of the living room.  It was hilarious.  She was already like a 40 year old man with her bathroom habits.  "How did this happen", I asked Justin?

Well, it was soon made clear.  When you're home alone with a toddler, you tend to bring them with you when you go to the bathroom if its not going to be a lightening quick visit.  Justin was always bringing Allie with him because she is definitely not to be trusted in any room by herself for more than 30 seconds.  So, the little demo in the livingroom came courtesy of observing her father in the "little wrangler's room" for months.  He was going to be who she modeled so he had to be verrrrrry careful with this particular part of parenting.

We decided we weren't going to push potty training.  If she wanted to use it, the potty was there.  She loved the book 'My Big Girl Potty' by Joanna Cole, so that was encouraging.  The main character, Ashley, was her favorite ever in any book and we used that to our advantage a LOT; i.e. "Ashley always finishes her dinner", "I bet Ashley goes to bed before 10pm", etc.

About a week after the potty was delivered, the following photo was sent to me in a text from my husband: 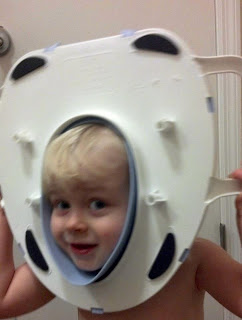 There was a message that said, "I don't think she gets it."  What can I say......the child is a nutcase like her mother and will do anything for a laugh like her father.  No one in my family was surprised when I forwarded this to them.

Allie pooped on the potty a week ago.  We were so shocked that I just stared at it for about a minute.  'There's a huge pile of poop in there!  She said she had to go and THIS time she meant it.  Holy shit.'  I texted everyone.  I was so proud.  She didnt start with the easy work.  She went right for the pooper.  On St. Patrick's Day last week, she peed for the first time in the potty.  There should've been a gun shot because at that moment, I realized ITS ON!  Let the games begin!!